Take A Breath Fanatics, The Bombers Are Still In This

Okay, if you're a Yankees fan, you're probably ready to push the panic button after last night's baffling 6-run 9th inning, 8-0 loss to the Texas Rangers in game 3 of the ALCS. You might be thinking that maybe the baseball Gods have decreed that the Yankees domination of the Rangers in the postseason has finally come to an end; that maybe it's the Bombers' turn this time to walk away acknowledging--for the first time in a long while--that they were not the better team.


Let's face it, in this ALCS the Yankees have been completely over matched by the Rangers starting rotation; in all 3 games they've had to play from behind, and in their only win in game 1, the Yankees were only able to get to the Rangers' bullpen. Their offense seems to be asleep, having hit for a .194 AVG. with only 2 homers and 8 runs in the first 27 innings of this series. In last night's game, the Yankees could only muster 2 hits and work 1 walk off of "The Assassin", aka Cliff Lee.


"Bottom line, we just need to swing the bats better," said Alex Rodriguez after the game. "We had...chances to come up with some big hits and good at-bats. Bottom line, two hits and one walk is just not good enough for our offense."
Clearly. But it's not time to push the panic button just yet.
"Yeah, we're down 2 games to 1," Girardi said during the postgame interview. "But we're a very good club. We've been resilient all year. You don't win 95 games in our division without being resilient."
Exactly.
I will be the first to admit that I sat through last night's game feeling every emotion a fan feels when their team is being completely shut down by its opposition: anger, anxiety, sadness, fear, shock, etc., etc. But after awhile, I began to breathe again, and try to remind myself of the "Yogi-ism" the Rangers were forced to learn after game 1: It ain't over 'til it's over.
We've seen the Yankees lose back-to-back games before, only to come out in full force thereafter. Albeit three of the Yankees' all-stars--Jeter, Teixeira and Rodriguez--have not swung the bats well at all in this series, having combined for 3 runs on 5 hits with 12 strikeouts thus far, there's still something to be said for the Yankees only being down 2-1. Add to this sentiment the fact that with the exception of Andy Pettitte, who really pitched an excellent, gritty game 3, the Yankees' starting pitching has been lackluster to say the least. One can argue that this should be a 3-0 series and the Yankees should be preparing for an early exit. But fans know that you can never count the Yankees out in situations like this; that these Yankees are like a cornered gutter rat in New York City: they attack. 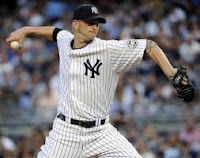 Of course, trying to show great face and stay optimistic will be a challenge for fanatics in tonight's game 4, with the unpredictable AJ Burnett getting the start against the Rangers' Tommy Hunter. AJ's "problems" this season have been well-documented, so we don't need to list them here. But, AJ does sport a 2.50 ERA in 3 starts against the Rangers in 2010, so we know that he can certainly come up big tonight.
"If you put [Burnett] out there, his stuff could get nasty," Texas manager Ron Washington said. "One guy who you don't think is going to do anything might be the guy who steps up and has everything fall into place. I'm concerned about him."
Hunter on the other hand has an 0-1 record with a 4.50 ERA this postseason. Another postseason rookie, he boasts a 4.45 ERA for his career, with batters hitting .265 against him. Hunter is a far better pitcher at home with a 3.06 ERA as opposed to .448 on the road. You figure that even if AJ sputters tonight, Yankees batters could fare well against Hunter and get this series tied at 2-2.
"I don't think we're in trouble," Girardi said. 'As I said we're a good club. We're down two to one; we're not down three to nothing losing in the bottom of the 9th."

It is clearly not over for the Bombers. Again, we've seen them in this situation before. Remember the 1996 World Series against the Atlanta Braves?

Posted by Rasheeda Cooper at 1:40 PM