Mo, Yanks Closing In On Deal 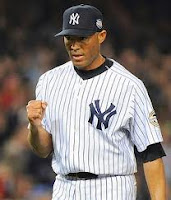 Mariano Rivera and the Yankees appear to be on the cusp of closing a deal for the greatest closer of all time. Via Ken Fidlin of the Toronto Sun:

"Mariano Rivera is quietly closing in on a new contract that will pay him $17 million.

"Rivera, 41, is seeking a two-year deal but the Yankees have not yet agreed to go beyond one more season for their iconic bullpen closer, though they haven’t balked at giving him a raise over his previous $15 million stipend."

With the start of the Winter Meetings beginning next Monday in Orlando, it seems likely that the Yankees may want to wrap up their negotiations with Mo this week or during the meetings. Best case scenario would be to formalize a deal sooner than later as I'd suspect they would like to focus on leaving The Sunshine State with at least an agreement from "The Assassin" aka Cliff Lee to join their ranks. If the Yankees can achieve this, hopefully, it may put some pressure on Derek Jeter and his agent to make a formal statement of their terms and get the negotiations moving on to the next phase. Hopefully.

Email ThisBlogThis!Share to TwitterShare to FacebookShare to Pinterest
Labels: Mariano Rivera, Yanks Closing In On Deal