What Will Andy Pettitte Do? 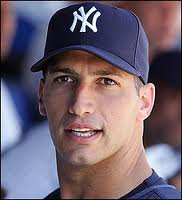 Andy Pettitte is still uncertain as to whether or not he will retire before the start of the 2011 season. What he is certain of, however, is that he will only pitch for the Yankees.

"At this point in my career, it'll be New York or it will be nowhere, for sure," Andy said on Houston TV station KHOU. "[I] just feel like I've done too many...special things up there with that group of guys, not to finish it up there."

What continues to make the decision to come back a difficult one for Pettitte are his children. He has three sons and wants to be around more to raise them as they're getting older. Traveling from city-to-city for six months a year makes that difficult.

"I just feel like I have a big responsibility here. I have three boys. I feel like ...we're getting to that point where it's the crucial ages of their lives that I need to be around a little bit more."

If Pettitte does decide to come back for 2011, it will be his final season.

Assuming he returns and the Yankees win the Cliff Lee sweepstakes, the rotation would probably look like this:

Pettitte's retirement in this instance would either force the Yankees to pursue another free agent pitcher or possibly slide Dustin Moseley or Ivan Nova into the 5th spot, moving Burnett up one to 4th.

Email ThisBlogThis!Share to TwitterShare to FacebookShare to Pinterest
Labels: Andy Pettitte, New York Yankees, What Will Andy Pettitte Do?