What's Been Going On This Week

Okay, fanatics. Before my And the Award Goes To...post, I'd been absent for a week trying to troubleshoot some Blogger issues. I'm back now and ready to discuss some of the more notable topics that have been reported in my absence. It's been a very interesting week with free agent chases, "Core Four" contract renewal talk, DH predictions, etc., etc. So let's just jump right on in.

The Chase for Cliff Lee Begins

No surprise here. Yesterday, Yankees GM Brian Cashman, flew to Arkansas for a tete-a-tete with Cliff Lee and his agent, Darek Braunecker. While it is highly unlikely that a contract will be signed or an agreement will be made during this meeting, fanatics should be content that the Yankees are wasting no time in their pursuit for the league's most coveted free agent.

Cashman will have to go hard or go home in the Lee sweepstakes. The articles are out there about how "comfortable" Lee is in Texas because it's close to his home in Arkansas; how the Rangers' run in the playoffs may have convinced Lee that they are a team that can contend and so on and so on. The Yankees GM will also have to consider the other teams that will probably be vying for Lee: Boston Red Sox, who will be looking to lock in a third ace-caliber pitcher to compliment lefties, Josh Beckett and Jon Lester; Detroit Tigers who would surely make a serious run to top the AL Central with Lee and ace Justin Verlander headlining their rotation. The Angels may also be another team placing calls to Lee and his agent as they look to rebound from a nightmarish 2010 season. Notable National League teams include the Phillies, Dodgers and Nationals.

Realistically, however, the only two teams that will either have Lee in their rotation in 2011 are the Yankees or Rangers. Again, Lee does like playing in Texas, it's close to his home and he's noted that the Rangers look like a team that will contend "for years to come". Further, it's been reported that owner Chuck Greenberg has plenty of money in his arsenal to make a "more-than-competitive" offer for Lee. But the Yankees can offer more money than any other team. They are a given to make the playoffs every year. If it at all matters, Lee will gain rock star status in New York. And it can not be overstated, the value of Lee's friendship with CC Sabathia. Expect Cashman to highlight all these points in his pitch to Lee and his agent.

Let's be clear about this folks, Derek Jeter and Mariano Rivera will be back in pinstripes next year. For the two most notable Yankees of their era, playing anywhere else would be blasphemous. With that said, however, re-signing both men won't be as easy as most fanatics probably thought it would be.

Mariono Rivera will probably be the easiest signing of the two. On the cusp of turning 41, Rivera knows the "contract game" of aging players and so, may accept a 1-year deal without much muss-or-fuss, but expect him and his agent to seek a 2-year deal. Not much has been written about what Mo may be seeking in terms of pay or what the Yankees are willing to lay out. Going year-to-year, Mariano could easily stay at $15 million per.

He is the face of the franchise. His status as an iconic Yankee has been compared to Joe DiMaggio and Mickey Mantle. He will become the first Yankee to reach 3,000 hits in his career, and he will accomplish this next year. Even after the down year he had in 2010, Jeter's production both offensively and defensively, in both regular and postseason play, put him in an elite class of players in Yankees history. Revenue earned from merchandise and memorabilia that bear Jeter's name and number, far surpass any other Yankee of his era.

Do the Yankees need Jeter? Absolutely. My prediction, like many others, is that Jeter will get about $20 million per. That's just about the right number to make a player of Jeter's caliber comfortable. Sure, there's talk of Jeter's production dwindling and that he will be "over-payed", but is $20 million even close to what he's really worth to the franchise overall? No way.

What may make this a long negotiation, however, is how long Jeter wants to play. Jeter may ask for six years. Sounds like too much when you consider he'd be playing until he's 42 years old, right? But remember, A-Rod is locked in until 2017 when he will also be 42 years old. The Yankees would certainly never want to impress upon Jeter and his agent that A-Rod is of more value to the franchise than he is. It will be interesting to follow Cashman's strategy if Jeter does seek six years. 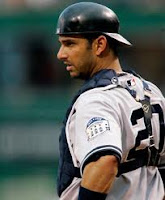 According to reports and tweets by his wife Laura, Jorge Posada may have to relinquish his job as catcher to make way for Yankees' Triple-A superstar, Jesus Montero. As of yesterday, Posada became the second Yankee this offseason to have surgery on his knee to repair a "minor" torn meniscus; Sabathia's procedure was on October 29. Sources close to the situation cited Cashman as informing Jorge "that he should come in [to Spring training] preparing to catch, but they are going to give Montero a real shot." Jorge was also told to "prepare to DH a lot." 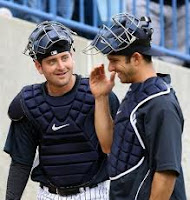 Posada's stats for 2010 were .248/.357/.454. with 18 homers and 57 RBIs; considerably down from .285/.363/.522 with 22 homers and 81 RBIs in 2009. Since being rewarded with a $52 million, 4-year deal in 2007, he's caught less than half of games played thus far. Given his injuries, Joe Girardi's seemingly unwillingness to play him more than three games in a stretch, and his age--he's 39--it's not surprising that the Yankees have decided to make this move. Do keep in mind though, that Montero will still have to compete for the right to dominate play time during Spring Training, so perhaps Jorge can still make a case for himself for at least one more year. And, Francisco Cervelli, who again proved to be a viable backup catcher this season, won't be too far back in the rear-view mirror as the possible lead.

But what could the DH role really mean for Jorge? If there's any truth to the belief that the Yankees may consider moving Jeter to 3rd to hide his shortened range, and have A-Rod be the everyday DH to protect his hip for the rest of his tenure, it's possible that Jorge may face an uphill battle in renewing his contract for 2012. We shutter to believe that fanatics, but it happened to Bernie Williams, right?
Posted by Rasheeda Cooper at 3:23 PM