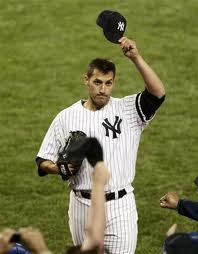 It’s taken me three days since Andy Pettitte announced his retirement to write a piece on the man that I consider to be one of the greatest Yankees of the past two decades. I did not know how emotional I would become on word of his decision, and so it has been a somewhat dismaying process for me to get my thoughts together, or for the very least write a piece appropriate of my feelings toward Andy.

Although for weeks it seemed as though his decision to walk away from the game of baseball seemed inevitable, there was still hope, always hope, that the competitor in Andy would show itself, just one more time, and Yankees fanatics could rejoice in knowing they’d see #46 stare down batters for one more season.

“I believe I’m done.” Andy said. “I don’t know what I’m gonna feel like…two months from now; three months from now. I am not gonna play this season; I can tell you that 100%. But, I guess you can never say never; I don’t think I would be scared if I literally went through this whole season, and I just had a hurtin’ in my stomach saying ‘I wanted to pitch;’ that ‘maybe I would try it again.’”

And so there still lies hope. But as he continued to address the media, you could feel in his words as he reflected on his career and as he spoke of his dear family whom he has walked away from baseball to be with, that his final game on October 18, 2010, a loss to the Texas Rangers in game 2 of the ALCS, was his final game. Thus, the end to a storied career.

For many fanatics, Pettitte’s retirement came with anxiety. On Thursday, minutes after YES Network’s Michael Kay tweeted that Andy was indeed going to announce his decision the next day, the twitter boards lit up with talk of how, now, there was no way to save the Yankees rotation. That, with Andy out of the equation, the Yankees hopes of a title run were slim to none. We don’t know how true that is, of course, as the season has yet to get underway, and it could very well end up being the case toward season’s end. But I didn’t care about any of that. For me, all that talk and speculation could have been, and should have been, an afterthought to the reality that Andy Pettitte was retiring from baseball.

What has Andy meant in the grand scheme of our national pastime? The stats tell it all:

The stats don’t lie. They reveal the greatness of a man whose contribution not only to the Yankees, but to baseball, will be remembered, compared, analyzed and argued for as long as fanatics and the gatekeepers of the greatest team in all sports keep his legacy alive. But stats don’t even begin to tell the whole story of who Andy Pettitte is, was and always will be to his fans, teammates, friends and the family whom he loves more than the sport that made him so beloved.

Pettitte as a player was gritty, fierce and unrelenting. He gave his all every time he stepped out on the mound, peering just above the rim of his pitching glove—formidably—at his opponent. His only cause: to win the game. It wasn’t to be admired by the tens of thousands of fans in attendance watching the game, or by the millions of others tuning in at home; it wasn’t to hear fans at the stadium cheer him on as the Bleacher Creatures gave their roll call; it wasn’t simply for the sake of adding another game to his starts stats, or in the hopes that another win could put him closer to Cooperstown. It was always about the moment for Andy, to win that game and put his team closer to winning a championship. That was his job. That’s all he ever wanted to do.

As a man, ok, I’ve never met him. But I’m a pretty good judge of character. I’ve heard enough sounds bites from Pettitte himself, I’ve read enough articles from sportswriters who’ve had the pleasure of talking with Pettitte and from bloggers who follow the Yankees and have gotten to know Pettitte, to make an assessment of what kind of man I believe Andy Pettitte is.

Andy, is a humble man. He’s never taken the game of baseball for granted, believing that his successes were owed and not earned. Coming from a small Texas town and rising so brightly to the top of an exceptional career, Andy never forgot his beginnings and never once made it seem as though his job, to pitch, was just some talent that was rightfully bestowed upon him so that he could bask in the glory of wins and domination.

It was exactly the opposite. It was a grind. It was a struggle. It was a fight every year for him to prepare himself both mentally and physically to compromise his arm in order to give his team and his fans everything he had. But it was what he loved and he was the best at it for the last 15 years. Yet, I bet if you told Andy that, actually gave him the numbers to prove it, he’d blush—partly in disbelief of his greatness, partly in embarrassment that any deal would be made of it.

I believe he was a teammate’s teammate. The kind of guy that wouldn’t get in your face when the team was losing, but would perhaps address a situation or struggle with encouragement and assurance that if you needed him, he’d have your back. CC Sabathia, who affectionately called Andy the “Godfather” of the pitch staff, has spoken many times of Andy’s kindness to his brethren and his willingness to lend himself in whatever capacity necessary. Mariano Rivera said that “Andy was a great teammate…and was respected by every person in the clubhouse.” And Mo would know a thing or two about respect, wouldn’t he.

But even more important than who he was in connection with baseball, he is a loving family man, whose greatest accomplishments are his relationship with his wife, Lauren, and their three beautiful children. I don’t recall ever hearing any player in any sport that I follow, be as open and as honest about how being away from his family for the sake of his career, was harder than any challenge his sport could present him. Here is a quote taken from Andy back in 2001:

"If God took baseball away today, I don't know exactly what I'd do. But I know one thing—I'd be perfectly content, and I can honestly say that from the bottom of my heart. I've got a wife who loves me and whom I love to death. I've got my three kids. I'd be ready to shut it down right now and watch them grow up if I had to. I feel that everything that's done in my life, God has planned. So if I happened to blow my arm out or whatever, I'd know that He was doing things for a certain reason, and I really think I could live with that."

I told a friend on twitter Thursday that Andy Pettitte was a hero. Another friend questioned that, I’m assuming not believing that Andy had ever done anything so great to be labeled a hero. Or perhaps his definition of hero just differs from mine. Not all heroes exhibit the extraordinary or have to personally make a difference in one’s life to be given such a title, all though I could easily make the argument that Andy has been an extraordinary player and human being. For me, heroes inspire others with actions that are to be commended and replicated. Would you not wish to be someone who gave your all for what and who you loved? Do you not view humility--which has become very rare in today’s society—as a virtue to aspire to? Can you not appreciate a father who knows, nurtures and makes personal sacrifices for his children? Show me a handful of dads like Andy Pettitte, and I’ll show you two handfuls of deadbeat fathers whom half probably don’t even know where their children are and don’t care.

I remember being at the last game at the old Yankee Stadium in 2008. It was a bittersweet night for me as I knew that the Yankees were playing their last game there, both for the season and forever, yet I was happy to see Andy pitch that night; I always marveled at the contortion of his body when he releases his pitch. An older woman sitting next to me talked about all the games she had been to at the stadium and how she loved to see Andy pitch.

Yes, Andy is our “boy.” We fanatics watched him grow up in pinstripes from a young man, to becoming THE man. And although he left us for a few years to take on another challenge, he lived on in our minds and our hearts. When he returned to us, I’m sure he’d say that he was fortunate to be back home, in the Bronx where he belonged, but the truth is we were fortunate to have another chance to bear witness to his greatness and heart. We are better fans today because for the better part of the last two decades, Andy Pettitte reminded us of what the game is really about: hard work, selflessness, sacrifice and winning.

Thank you, Andy Pettitte. Thank you for 16 seasons of dedication and inspiration. You truly are and always will be, a Yankee.

The Yankees signed RHP Freddy Garcia to a minor-league deal yesterday, thus adding him to a roster of pitchers who will be competing for the 4th or 5th spot in the rotation.

We took a look here at Bomber Boulevard on Freddy Garcia's stats and illustrated his effectiveness with some graphs back in December, when word first came that the Yankees had interest in him. So, I'm not going to bother giving you the rundown on Garcia again; you can look here for the earlier post. What I will do is provide you with the press release of the signing from The Associated Press via boston.com:

Free agent pitcher Freddy Garcia and the New York Yankees have reached agreement on a minor league deal, a person familiar with the negotiations told the Associated Press last night.


The contract could be worth up to $5.1 million, the person said, and it also lets Garcia opt out by March 29.


New York is still waiting to hear whether 38-year-old Andy Pettitte will return for another season. CC Sabathia remains the Yankees’ ace and Phil Hughes and A.J. Burnett are assured spots, with Sergio Mitre and young Ivan Nova as possibilities to start. Former Cy Young winner Bartolo Colon and the Yankees agreed on a minor league contract last week.


Garcia bounced back from three injury-interrupted seasons to pitch well for the White Sox last season. The Yankees got a close-up look at him when he threw seven impressive innings to beat them in Chicago Aug. 27. Garcia also lost at Yankee Stadium in late April.