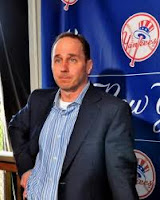 No real surprise here. I doubt if anyone thought that there was even a remote chance that the Yankees wouldn't re-sign Brian Cashman. He's been as good a GM as they come in baseball (See: 4 championships, 13 team postseason appearances and the signings of Alex Rodriguez, Hideki Matsui, Roger Clemens, CC Sabathia, Mark Teixeira, Nick Swisher, Bartolo Colon, Freddy Garcia and the re-signing of Andy Pettitte). And these are just to name a few. Sure, we could list some of the players who turned out to be absolute duds, but we'll keep it on the bright side in this post. With the offseason officially underway, it will be interesting to see what "Cash" has up his sleeves.

Now, on to a new deal for Sabathia!

I really love Robinson Cano. Really. This is a guy who has done nothing over the last few seasons except give the Yankees everything that they wanted and needed from him. Here's a dude that goes out on the field and plays at the highest level; off the field: no drama, no issues.You wouldn't be able to blame the guy if he were to develop somewhat of a "me now" attitude though, as he has clearly become the best player on the Yankees entire roster. But, he's never given me, and probably no other fanatic, any reason to believe that he would do nothing more than continue to go about his business the right way.

But, he hired Scott Boras as his agent. Big mistake.

According to this article in The New York Post, Boras is asking the Yankees to drop the two club options on Cano's existing contract and negotiate on a new one.

"I called [Brian Cashman] to ask about dropping the options," Boras told the Post. "He hasn't returned the call."

The Yankees have options on Cano that will pay him $14 million in 2012 and $15 million in 2013. For a player of Cano's caliber, it makes sense that the team would exercise both options; less than $30 million over two years for the best hitter on the Yankees, not to mention the best second baseman in baseball, is a gimme.

Let's break down the numbers. In 159 games this season, Cano hit .302 with 28 homers, 118 RBIs and had an OPS of .882. Last year, he finished the season with a .319 AVG, 29 homers, 109 RBIs and an OPS of .914. He was 1st for the Yankees in 2011 in hits with 188, second to Curtis Granderson in runs and slugging percentage with 104 and .533, respectively, and was promoted to hitting 3rd in the lineup during the postseason. Clearly Cano has a case here, as it generally goes that with more production comes more money, and the Yankees would have a hard time arguing that he is undeserving of a bigger paycheck.

But what bothers me here, is the timing. This news from the Cano/Boras camp is not as lethal a blow of disrespect as the opt-out announcement of Alex Rodriguez during the 2007 World Series, but it is reminiscent. Why come with this now, when it's clear that the Yankees need to be focusing all of their attention and ample resources on securing CC Sabathia if the big guy decides to opt out of his contract, and all signs say he will? Would it have been too much to ask to allow the Yankees to deal with that issue and then bring on the "mo' money" parade? No disrespect to Cano at all, but Sabathia is worth way more in Yankee gold than Cano is. With no outstanding starting pitchers on the market that the Yankees can buy, bringing back one of the best in the league should be priority no. 1. And let's not forget that Cashman still has to secure another viable starter for the rotation. The Yankees shouldn't  have to deal with talk of a contract extension for any other player on the team this offseason. To say that Scott Boras is probably the most hated agent in Yankeeland, is an understatement.

This is going to be something really interesting to watch unfold. It is the Yankees' "policy" to not offer contract extensions to their players. But again, Cano is the Yankees' franchise player right now; to not offer him an extension will be perceived by many, and possibly Cano, as the team not recognizing his value. The bar on recognition was set with A-Rod's $275 million, 10-year contract. Yankee stars have been hoping for that same acknowledgment ever since (See Derek Jeter and Jorge Posada). If the team won't pay him now, and Cano still has several years in his prime ahead of him, what do you think this will mean when he becomes a free agent in 2013? It could mean a super-big payday for Cano, as other teams are sure to clamor for his services, and a big headache for Cashman.

My Return and Moves for the 2012 Season

Fanatics!! Look who decided to come out of hiding. Yes, folks, I'm back. I have figured out a way to keep up with my busy life and continue to bring you guys my take on everything Yankees. The secret? Force myself to write at least every week no matter how tired I am, even if it's just a paragraph. I feel as though I've been completely disconnected from you all, and I can't have that. You guys are my extended family, and so, here I am, ready to talk Yankees.

On the ALDS - I won't go into great detail on this; the last thing I want to do is re-hash horrible memories of a loss that hurt like crazy. All that I will say is that the offense was abysmal and Joe Girardi's management was again, questionable.

It's time for a shake-up, people!

So where should it begin? Let's talk about this lineup. If I'm Brian Cashman, my first move is to put Nick Swisher on the trading block. It hurts me to say because I love Swish, but the downfall in his production this year, combined with another failed postseason, means it's time to go. The Yankees have a $10 million option on him for 2012, and if they decide to pick it up, it should only be for the sake of trading him. I give Swish much credit for the adjustments he made at the plate mid-season, which obviously helped him end the season batting .260, and for his home run production. But it's no longer enough. At this point, Carlos Beltran sounds like a viable option if he can stay healthy. If not Beltran, why not Andruw Jones? Jones is still a great outfielder and I believe he will produce more if he can play everyday.

Next up is Derek Jeter. For those of you who believe that to say anything adverse about Jeter is sacrilege, please skip ahead to the next paragraph. It is time to move The Captain to the end of the lineup. The days of Jeter being the fastest, most productive hitter and base stealing threat are long gone. Brett Gardner and Curtis Granderson have clearly taken over that role, and I say, they should fill the 1-2 spots, respectively. I'd place Jeter in the 9-hole to not only tighten the back-end of the lineup, but also to give him opportunities to hit as the second lead-off man. It would be quite the scene to watch eight players' names be called before Jeter's, but Girardi must not continue to allow the reality of Jeter's present to be superseded by the legacy of his past.

And it's time for a switch-up in the middle of the lineup. I say, have Robinson Cano, Alex Rodriguez and Mark Teixeira hit in the 3-4-5 spots, respectively. Sure, the Yankees had nothing to show for this set-up in the playoffs, but over a season, I think this will work well. Robbie is clearly the best hitter on the team and should have the 3-spot. If Tex bats behind A-Rod, he'll see better pitches which will hopefully translate into more hits and a better batting average. And, regardless of what any of you fanatics may think, if A-Rod comes back as healthy as he was during Spring Training and the beginning of the season, he will still be their best clean-up man. In A-Rod I still trust!

Russell Martin will no doubt be back as the everyday catcher, but my vote for his back-up is Francisco Cervelli. If the Baseball Gods would allow this kid to get through a full season of baseball without injury, I see no reason why he can't back-up Martin. He's a decent hitter, he's fearless and he calls a great game; particularly when the ace of the staff is the mound.

Which brings me to all the hullabaloo over CC Sabathia. If any of you believe that he will not be back with the Yankees next year, you also believe that the Yankees will pick up David Ortiz. CC will opt-out of his contract, as he has every right to, but it will only be to force the Yankees to pay him more money. He's become accustomed to life in New York and his family loves it here. But besides that, he knows that the Yankees can't afford to let him walk; he's going to get every bit of money he asks for, even if it means Cashman giving up his own salary to do so.

Speaking of Cashman, he's expected to sign a new contract with the team any day now. Sorry to you fanatics that hate him, and too bad to the Red Sox fans who secretly pray that he will become the new GM in Beantown. It ain't gonna happen. With a questionable rotation to sort out last offseason, Cashman put on his best poker face with the signings of Bartolo Colon and Freddy Garcia and came out a winner; he also gambled and won by bringing in Jones and Eric Chavez. He's not going anywhere.

But Colon and Garcia will most likely not be back in 2012, so again, the Yankees head into another offseason in desperate need of viable starting pitching. Texas' CJ Wilson seems to be on the list of everyone's favorites; he's pitched .500 over the last 2 seasons with a 31-15 record and an ERA just over 3.00. He also ranked in the top 10 lowest ERAs this season with a 2.94. The cardinals' Edwin Jackson has also been mentioned as an option for the Yankees. Yu Darvish, the phenom from Japan, is also picking up steam around the blogosphere as a possible candidate, but I doubt if the Yankees are open to signing another Asian pitcher; it hasn't worked out very well for them so far. I'm guessing all roads will probably lead to Wilson and the resurgence of talk about "King" Felix Hernandez. I'm resigned to giving up on that dream, however; he's not leaving Seattle.

So as the offseason gets underway and the Hot Stove heats up, I'm gearing up for an exciting few months of ridiculous rumors, speculation and the chase for Sabathia. Should be a really good time, fanatics.