According to this Twitter feed of the NY Post's Joel Sherman, Alex Rodriguez will officially deny the accusations outlined in this morning's Miami New Times News report citing him and other notable baseball players as receiving HGH and other banned substances from the federal investigated anti-aging clinic, Biogenesis.

According to what is to come in A-Rod's statement, he was never a client of the  clinic and has no realtionship to the clinic's chief, Anthony Bosch. A rep for Alex also tells Sherman that he denies using PEDs in the time frame outlined in this morning's scathing report.

A-Rod, Other MLB Stars On Client List of PED Clinic

This morning, the Miami New Times News reported that Alex Rodriguez and several other big names in Major League Baseball are on a list of clients for the now-defunct Miami anti-aging clinic, Biogenesis.

The report comes after the New York Daily News reported this weekend that Biogenesis was under federal investigation for supplying PEDs such as HGH and numerous other banned substances to professional athletes.

Here is the evidence against A-Rod that the Miami New Times list in their report. The "notes" listed below were from the files of the clinic's chief, Anthony Bosch:

Born and raised in Miami and starring on the diamond since he was 18 years old, A-Rod admitted in 2009 that he had used steroids, claiming in an ESPN interview that his doping was limited to a three-year window — 2001 through 2003 — while he played under a record contract for the Texas Rangers. Ever since then, A-Rod claimed, he'd been playing clean. He'd never failed an MLB drug test since penalties were put into place.

Yet there was his name, over and over again, logged as either "Alex Rodriguez," "Alex Rod," or his nickname at the clinic, "Cacique," a pre-Columbian Caribbean chief. Rodriguez's name appears 16 times throughout the records New Times reviewed.

That's not the only damning evidence against A-Rod, though. Another document from the files, a loose sheet with a header from the 19th Annual World Congress on Anti-Aging and Aesthetic Medicine, lays out a full regimen under the name Cacique: "Test. cream... troches prior to workout... and GHRP... IGF-1... pink cream."

IGF-1 is a banned substance in baseball that stimulates insulin production and muscle growth. Elsewhere in his notebook, Bosch spells out that his "troches," a type of drug lozenge, include 15 percent testosterone; pink cream, he writes, is a complex formula that also includes testosterone. GHRP is a substance that releases growth hormones.

There's more evidence. On a 2009 client list, near A-Rod's name, is that of Yuri Sucart, who paid Bosch $500 for a weeklong supply of HGH. Sucart is famous to anyone who has followed baseball's steroid scandal. Soon after A-Rod's admission, the slugger admitted that Sucart — his cousin and close friend — was the mule who provided the superstar his drugs. In 2009, the same year this notebook was written, Sucart (who lives in South Miami and didn't respond to a message left at his home) was banned from all Yankees facilities.

The mentions of Rodriguez begin in 2009 and continue all the way through last season. Take a page in another notebook, which is labeled "2012" and looks to have been written last spring. Under the heading "A-Rod/Cacique," Bosch writes, "He is paid through April 30th. He will owe May 1 $4,000... I need to see him between April 13-19, deliver troches, pink cream, and... May meds. Has three weeks of Sub-Q (as of April)."

Four of the more notable MLB stars on this list are Gio Gonzalez, Melky Cabrera, Bartolo Colon and Yasmani Grandal. Cabrera, Colon and Grandal have all been suspended recently after failing tests which violate MLB's Anti-Drug program.

There is no way to know what the fallout from this will be just yet. While I'm ceratin that the Yankees and their PR machine are aware of this story, no statements or comments have come from their side. We can't expect to hear from A-Rod on this just yet; of course he will remain silent until his publicist and Yankee brass have "assessed" the best way for him to handle this situation.

Here's my educated guess. If this story is true, Alex can forget about any chance of ever getting into the Hall of Fame. Yes, we know that he's a PED user, but the dates outlined in this report put his use at just last season. So, it would not only mean that basically his entire career has been a success off of his PED use, but that he lied about his usage...again. If there were any writers of the Baseball Writers Association of America considering giving him a shot at some point to get in, there's no way they would now. You know--first time shame on you, second time shame on me, etc.

I am also not sure how the Yankees would be able to use this as a means to void his contract, which I'm almost certain is at the top of the list of questions fans already done with A-Rod will ask. It depends on what's in his contract, and I doubt there is any clause stating the Yankees can axe him for a "moral" violation. Also, he hasn't failed a test given by MLB since admitting to his usage during his time with the Texas Rangers. All we have are the "notes" of Bosch, but they are damning enough evidence to convince MLB that A-Rod continues to use. Whether MLB could use this as a reason to officially suspend him, I can't say either; what I'm almost certain of is that someone in MLB brass will work diligently to figure out a way how.

While I wait for the MLB and fan fallout to commence, I just want to say for me personally, that I am disappointed with Alex for this. I don't like being fooled twice, and I believed that he was indeed "clean." But will I no longer be an Alex Rodriguez fan? No. For those of you who follow me here, on Facebook or Twitter, you know the A-Rod fan I am. You also know that PED use does not particularly bother me because I understand the human propensity to cheat in order to be great or get ahead. Athletes are human like the rest of us and they want glory, just like the rest of us. What I don't like is being lied to. This was my problem with Barry Bonds; this was my problem with Roger Clemens; this was my problem with Lance Armstrong. So am I looking at A-Rod "sideways" right now, yes I am. Am I shocked or devestated, not even close.

Alex Rodriguez has officially made it through the arthroscopic surgery to repair his left hip. The procedure was performed yesterday at The Hospital for Special Surgery in New York City.

So the easy part is over; now the hard work of rehabilitation begins. If this photo is any indication, Alex will be ready for the challenge. 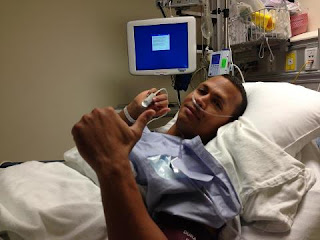 Good luck and a speedy recovery to you A-Rod!!

Email ThisBlogThis!Share to TwitterShare to FacebookShare to Pinterest
Labels: A-Rod to Fans Thumbs Up, Alex Rodriguez

And the Countdown Begins

The Yankees announced yesterday that surgery has been set to repair Alex Rodriguez' torn left hip, finally. The 2-hour arthroscopic surgery will be performed next Tuesday, January 16 at the Hospital for Special Surgery in New York by Dr. Bryan Kelly.

For those of you wondering why the announcement of A-Rod's surgery was prolonged, according to Kelly, Alex had to strengthen muscles surrounding the area of his injury in order to speed up his next few months of rehab. Operating earlier would have prolonged recovery because muscles take longer to respond after surgery.

The doctor also reiterated the point he made to reporters earlier in the week--that Alex's injury is not the result of steroid use, but is a "developmental problem." In other words, the grind of 17 years of baseball, coupled with his age, manifested itself in to Alex's ailing hip.

So let the countdown to A-Rod's return begin. Kelly believes that Alex will be back sometime after the All-Star break; that may seem a bit too long for those of you who remember how fast Alex recovered after the surgery on his right hip in 2004, which didn't take place until February. Two things to keep in mind: this injury is a bit more severe than his first, and, Alex was able to bear weight on a healthy left hip in '04 while rehabbing his right. This time around, he'll be bearing weight on a previously injured hip.

Honestly, it would not surprise me at all if A-Rod misses the entire season; we fanatics are just going to have to deal with this if it happens. Fingers crossed.