The Captain Is In Full Swing

Ha, ha, ha! I missed this one yesterday:

By Emily Smith and Tara Palmeri of The New York Post

Not so classy, captain! 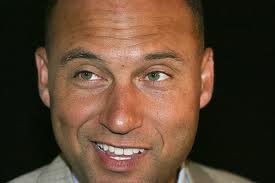 Yankees star Derek Jeter, one of New York’s most eligible hunks since his split with longtime gal pal Minka Kelly, is bedding a bevy of beauties in his Trump World Tower bachelor pad — and then coldly sending them home alone with gift baskets of autographed memorabilia.

The Yankees captain’s wham-bam-thank-you-ma’am kiss-offs came to light when he mistakenly pulled the stunt twice on the same woman — forgetting she had been an earlier conquest, a pal told The Post.

“Derek has girls stay with him at his apartment in New York, and then he gets them a car to take them home the next day. Waiting in his car is a gift basket containing signed Jeter memorabilia, usually a signed baseball,” the friend dished.

“This summer, he ended up hooking up with a girl who he had hooked up with once before, but Jeter seemed to have forgotten about the first time and gave her the same identical parting gift, a gift basket with a signed Derek Jeter baseball,” the pal said.

“He basically gave her the same gift twice because he’d forgotten hooking up with her the first time!”

Jeter, who fiercely guards his privacy to protect his All-American image and multimillion-dollar marketability, split with the gorgeous actress Kelly this summer and has been playing the field ever since.

The veteran shortstop usually shies away from the limelight, preferring stay-at-home parties with a tight circle of trusted friends.

“He normally doesn’t go out with girls. He will have them come to his house. He’ll have cocktail parties. His friends invite girls they think he’ll be interested in. He’s very shy,” another friend explained.

“He’ll occasionally take girls to a restaurant. He has a couple of restaurants that he goes to that aren’t trendy,” the friend said.

“He goes to Nino’s in New York. He used to go to Mustang Grill on the Upper East Side. I know he’s been dating multiple girls. He likes a hole in the wall, or he likes a place that his friends own. He’s very cautious. He’ll only go out on off-nights,” the friend said.

Afterward, Jeter sneaks the beauties home for some heavy hitting.

“The girls go through the back-door entrance in the Trump World Tower to avoid the paparazzi,” the pal said. “He broke up with Minka in the summer and is definitely over her. He is playing the field.”

And while the parting gift may seem cold, signed Jeter memorabilia sell like hotcakes on the Internet, with an autographed baseball fetching hundreds and even thousands of dollars.

Neither the Yankees nor Jeter’s reps immediately returned messages for comment.

Okay, fanatics, this isn't the nicest article we could read about our illustrious captain, but is this really news? It's been apparent for years that Jeter really enjoys being in the company of women; many women. Sure, his time with Minka Kelly made many believe that perhaps Jeter was growing up and choosing to settle down, and that would have been nice. But then again, the 3-year relationship was the longest he's ever been in, and before Kelly, Jeter kept company pretty often. Think about that.

I guess after the split, it was just a matter of time before reports surfaced of Jeter's extracurricular activities. I have no problem with his excapades, actually. He's young, gorgeous, filthy rich and probably the most powerful man in New York City, really. He can do whatever he wants. And the alleged gift baskets are a nice touch. But that's our captain; forever the team player.

Email ThisBlogThis!Share to TwitterShare to FacebookShare to Pinterest
Labels: Derek Jeter, The Capatain Is In Full Swing