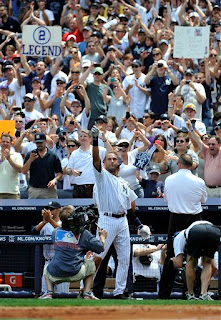 If you had asked any of his teammates back in 1995, "Would Derek Jeter ever get 3,000 hits in his career?" The answer probably would have been a resounding, "No."

When Jeter made his debut in May of 1995, not many of his teammates were very impressed. He was a skinny, tall, unpolished kid who wasn't quite ready for the big leagues. During his time playing in the minors, he was homesick; he called his parents every day crying that he wanted to come home. His discomfort with being away from his family for the first time in his life seemed to translate to his play on the field; he committed numerous errors and sported a batting average under .250 when he was called up from Triple-A to replace the injured Tony Fernandez.

"I can remember," said Paul O'Neill, "some of us [on the team] saying, 'this is the guy that's supposed to be our shortstop?'" Thus, a lackluster beginning for Jeter led to a demotion back to the minors.

But Jeter would have a second chance. Yankees brass and manager Joe Torre made the decision that  he would be the starting shortstop for the 1996 season even though Fernandez, the seasoned vet, still bore the pinstripes. In Jeter's first game of the season, he hit a home run.

The rest as they say, is history.

Jeter would go on to win the Rookie of the Year Award after batting .314 with 10 home runs, 78 RBIs and 104 runs scored. But that was just the beginning. Four World Series titles in 5 years; eleven of his 17 seasons where he boasted a batting average of .300 or better; twelve All-Star selections; five Gold Gloves; a fifth World Series win after an 8-year drought; being named team captain in 2003; a host of clutch hits in big game situations; the flip-play that will go down as one of the greatest defensive plays in baseball history; sacrificing his body to make a game-saving, diving catch against the Red Sox. I could go on fanatics, but you all know the history. The history of every great game and great play of a great Yankee.

And now today, in one of the greatest performances that the baseball Gods could have only written for the Captain, Jeter became the first Yankee, ever, to reach 3,000 hits. He did it on a game-tying home run. A home run. Only his third of the year. His first at the stadium since last July. He would go 5-for-5 on the afternoon, coming within a triple of hitting for the cycle. YES Network announcer Michael Kay, called the afternoon "storybook." And it was storybook. While his historic hit tied today's game against the Rays at 1-1 in the third inning, his fifth and final hit of the afternoon scored the go-ahead run. Yes, fanatics, storybook indeed.

And of course, for the always humble Captain, the most important thing was a team win.

"It would have been really, really awkward to be doing interviews and waving to the crowd after the game if we would have lost," Jeter said in his press conference after the game. "It's nice obviously to get a hit but, you know, we needed to win this game."

Business as usual for Jeter. Or maybe not so much. Although most of us probably could have guessed it, the ever-calm and relaxed Jeter admitted that he was nervous and felt pressure to hit coming into today's game.

"I've been lying to [the media] for a long time saying that I wasn't nervous and there was no pressure. There was a lot of pressure to do it here. So I have been lying to you for quite some time."

What did Jeter's teammates have to say about Mr. 3000's performance today?

"This definitely ranks...at number one to me," Mariano Rivera said. "[Jeter] being the first one that has done that for the New York Yankees is tremendous."

"I think he enjoys that moment," said Jorge Posada. "Five-for-five [doesn't] come easily. It's amazing what he's able to do."

" [Jeter is] a guy that's really represented the city of New York and this uniform as well as anybody," Alex Rodriguez told the media. "He's the symbol of the Yankees. I couldn't be more proud."

And neither could we. We've watched the skinny, unpolished, homesick kid become a great man and represent the pinstripes as honorably as his great predecessors. One could only imagine the smiles on the faces of Ruth, Gehrig, DiMaggio and Mantle, as they looked down on the Captain's historic performance today.

Yes. Derek Jeter is one of the greatest Yankees, ever, indeed.