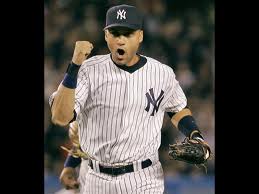 It took approx. one month for the most anticipated deal in baseball to become a reality. Finally today, Derek Jeter became a Yankee again.

The Yankees and Jeter have reportedly agreed to a deal that will pay the Captain a guaranteed $51 million dollars over 3 years. There is also an option for a 4th year at $8 million and Jeter can also earn $9 million in incentives for the option year. The news was tweeted by Jack Curry of YES this afternoon.

Friday, George A. King III reported that "significant progress was made" during talks between the two sides after the Yankees informed Jeter's camp Thursday that they were willing to increase each year of the 3-year, $45 million offer by $2-$3 miilion.Talks continued until the deal was finalized today.

I for one am happy that this is all over for two reasons. First, Jeter's credibility as the leader who puts the team first, began to slip as many fanatics--surprisingly--felt that the Yankees offer was more than fair. I personally believe that Jeter's silence on this was a big part of it; if he had spoken publicly to at least lay out what he felt he deserved and why, this all would not have been so one-sided. People tend to follow whoever is doing all the talking, and the Yankees front office spoke regularly without abandon.

Second, Cashman can now go into the Winter Meetings and put all his energy and focus into signing Cliff Lee. For me, it is not simply to snag the hottest pitcher on the free market, but I stand by my belief that if Lee signs, Pettitte will follow. It would be even sweeter now for Andy, as his Core Four brethren are back on the payroll.