Jeter to Work With Kevin Long 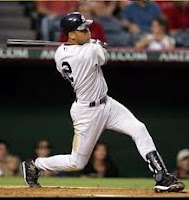 If anyone thought that Derek Jeter was simply going to bow to old age for his issues at the plate, they don't know how competitive the Captain really is.

Via Joel Sherman's blog, Jeter will be working on his swing this winter with pitch coach Kevin Long. Long, who re-signed with the Yankees as their hitting coach for the next 3 seasons, has been applauded by many in the baseball world for his knowledge of hitting and ability to get to know his players' strengths and weaknesses in helping them improve their swing. He's changed seasons for Robinson Cano, Nick Swisher and Curtis Granderson and helped A-Rod get back on track following last year's hip surgery. During late-August of 2010, a year in which Jeter struggled posting a dismal .270 ERA, he worked with Long and for the remainder of the season, hit above .300.

Although this is the first time that Jeter has ever sought help on his swing during the offseason, it should come to no surprise to anyone that Jeter would seek out Long this winter. The Captain is coming off a free-agency saga that had him and the Yankees in a lengthy negotiation process made difficult due to Jeter's struggles this past season. He is the uber-competitor, and it would be unlike him not to address his shortcomings in order to silence his critics. I expect in 2011 for Jeter to have the kind of renaissance season hit-wise as he did in '09 when he improved his defense to answer the rumblings that it was the worst for his position at shortstop.