It's been a rough year for Jorge Posada.

A valued member of the "Core Four," he has taken a lot of hits this year, beginning in the offseason, when GM Brian Cashman told him that he would no longer be the everyday catcher for the Yankees, but would instead be their designated hitter. It was a move that most of us saw coming, taking into account Jorge's age and the injuries that have plagued him for the past few seasons, coupled with the rising star of prospect Jesus Romero and the known defense of newcomer Russell Martin. Being the DH made sense, as Jorge has always been productive as a hitter, but his efforts in April and May were, for lack of a better word, lackluster, as he batted .132 and .219, respectively.

And who could forget "Jorge-Gate;" my term for the craziness that surrounded Jorge's request for a "day off" just an hour before a start on May 14, after learning of his demotion in the lineup during a series against the Red Sox at the stadium. It was an ugly turn of events that left many believing Jorge's run with the Yankees may come to an end this year.

But, Jorge managed to turn things around in June. He batted .382, getting 26 hits in 22 games. It seemed as though he was on his way back to being the hitter he once was, and on the verge of silencing the critics who deemed him "washed up." But it wouldn't last very long, as July saw his production dwindling again. He fared better overall than he had earlier in the season, but in 17 games following the All-Star break, Jorge went homer-less and managed only two RBIs. The lack of hitting was enough to force Joe Girardi to make a difficult, but necessary decision.

And so, it was announced last Sunday, that Jorge would no longer be the everyday DH, but would instead be a bench player. The honor of DH would go to Eric Chavez, who could be platooned to third base on days when starters like Derek Jeter or Mark Teixeira need a day off from playing in the field.

"[Girardi] said he's going to put the best lineup on the field," Jorge said. "And he doesn't know when I'm going to DH again, so right now I'm sitting the bench."

The one thing that most of us had to know, was that there was no way Jorge would repeat the mistake he made on May 14 by throwing another "temper tantrum." The criticism he received by haters and fans alike was scathing, and I believe he learned all too fast how quickly even an icon can turn into Public Enemy No. 1. What Jorge needed to do was just be ready to play whenever called upon, and give Girardi a reason to rethink his position. He did that yesterday.

Coming up to the plate in his first at-bat yesterday afternoon against the Rays, Jorge received a standing ovation at the stadium from sympathetic fans who wanted to show him that they appreciated all he's done for the Yankees in his career. Jorge responded with a two-RBI single to right field. He answered a second round of cheers in the fourth inning, with a single to center. For an encore in the fifth, following a solo shot by Curtis Granderson and a double and two walks by Robinson Cano, Nick Swisher and Eric Chavez, respectively, Jorge smacked a grand slam homer to the right field porch; the tenth of his career. It put the Yankees ahead 7-0 and they would go on to win 9-2. This was an incredible day for a proud man who has to have been in doubt of his worth at this point in his career.

After the big hit, Jorge would wave to the crowd for a rousing curtain call; a definite act of vindication.

"The fans are a big reason that I love playing the game. They deserve a lot of credit,"Jorge said. 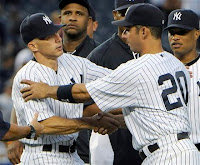 It's been rumored that the relationship between Jorge and Girardi has been sketchy since Jorge relieved Girardi of his everyday catching duties back in the late 90's. If there is dissension between the two, you wouldn't know it listening to Girardi's comments after the game.

"[Jorge] is a beloved Yankee and we all love him," Girardi said. "At times it's been a struggle for him but he's never stopped working. For that, I'm extremely proud of him."

As are we. I'll be the first to tell you fanatics, that I was in total agreement with Girardi for benching Jorge, and I still am. It's never easy benching a legend, especially when that legend plays for the Yankees, but what's best for the team must always come first, and I believe Girardi made the right call. I also believe that Jorge, although obviously disappointed, knew in his heart that the demotion was deserved. But today, he gave me, Girardi, and every other person in agreement with his benching, a reason to maybe think twice before relegating him to the dugout. The legend appears to have a lot of game left in him. With a month and a half left to the season, a continuation of today's performance down the stretch, could easily secure Jorge a spot on the postseason roster. I'm keeping my fingers crossed. 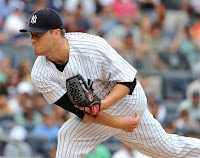 Phil Hughes continues to make a bid for a permanent spot in the rotation. He pitched 6 solid innings, striking out six batters, and only allowing two runs on four hits in yesterday's win. The fastball was definitely working for Hughes. It's likely that he may be designated to the bullpen, as Ivan Nova has clearly earned his way back in to the rotation, but Hughes certainly made that an even tougher decision for Girardi to make with today's performance.

Posted by Rasheeda Cooper at 12:12 AM