They Love Us in Minnesota 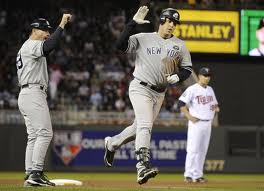 Let's gloat a little, fanatics. The Yankees OWN the Minnesota Twins. It's just a fact. I normally watch Yankee games feeling nothing but antipathy for the opposing team, and for me, the bigger the Yankee beat-down, the happier I feel. But when the Yankees play the Twins I actually feel bad, really. Of course I want my boys to win, but dang, sometimes I say to myself, "Will the Twins ever catch a break?" And will they? It just seems like they have no answer for the Yankees no matter who's on the mound or in the lineup; it's kind of sad, actually. Thank God I'm not a Twins fan.

Take last night's game. The Yankees won, 8-4. Another game where the home run dominance that the Yankees have shown all season was in the forefront. Mark Teixeira started the home run parade with a 2-run shot to left in the 3rd inning, scoring Curtis Granderson and putting the boys up 3-2. Speaking of Teixeira, I'm very disappointed in his .249 batting average, but if he continues to hit the long stroke with men on base, I'm more than willing to overlook it. Next up was Nick Swisher, who crushed another 2-run shot to left, scoring Tex and putting the Yankees up 5-2. Andruw Jones immediately followed with a solo blast to the 3rd level of the left field porch on a 3-1 count; Yankees go up, 6-2. I have to say that it's amazing how much you ignore great players that you're not privileged to see on a regular basis. I've never cared much about anything that I've ever heard about Jones throughout his career as far as his power goes, but I see now what baseball fans have been talking about; this guy can turn on a fastball like nobody's business. Not just the power behind it, but the speed on his swing is incredible. The blast was as Paul O'Neill would say, an absolute bomb!

Beside the homers, Yankees got hits from guys that have been coming up big in big situations. The Tex 2-run homer was made possible on a triple from Granderson. Brett Gardner hit a sac-fly in the 2nd inning that scored Eduardo Nunez, who has certainly earned the right to remain with the team for the rest of the season and the playoffs. In the 9th, a single from Francisco Cervelli scored Jones and Nunez, and pretty much put the game too far ahead for the Twins.

You would think that all this would have been enough to showcase the Yankees dominance over the Twins. But before a run was ever scored, the Baseball Gods, who can be downright cruel when they want to be, played the nastiest joke on Minnesota that could be played. CC Sabathia, who was beyond shaky in the first few innings of last night's game, gave up what was originally deemed a 2-run shot to Justin Morneau in the 1st inning, by the 1st place umpire. Unfortunately for Morneau, Joe Girardi, still reeling from the costly home run call the night before, had a better view of the shot and argued it a foul ball. The umpires reviewed the call and reversed it. Wow!! At that moment all I could do was shake my head, I mean, if this were any other team, reversing that call would have had me jumping out of  my seat. But I genuinely felt sorry for them. They have the absolute worst luck against the Yankees than any team I've ever seen. Really.

And it's becoming evident now how frustrating the bad luck is becoming. Twins manager Ron Gardenhire, was ejected from last night's game after emphatically arguing the reversed call. It made no sense for him to argue the way he did; the umpires reviewed it. We can go back to Wednesday's game against the Royals and say that the umpires blew a call there that they reviewed, but this situation was completely different. Wednesday's call was to determine a homer or a double; last night was to determine a homer or a foul ball. It's highly unlikely that umpires will miss a foul ball call on a replay. But getting back to my point, Gardenhire's frustration, I believe, was less about the call, and more about the call coming against the Yankees. He knows that any opportunity given to the Bombers to take a game, they will, and they did last night. I really feel for Gardenhire. 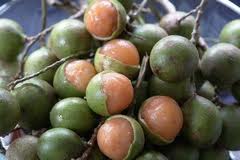 Anyhoo, Alex Rodriguez was back with the team last night. He's not expected to be activated until either Saturday or next Tuesday, but it was a plus to just have him present in the dugout, eating quenepas. If you're curious about those "Spanish limes" that A-Rod tosses back, you can read up on them, here. I love them; got a batch in my fridge right now.

Posted by Rasheeda Cooper at 11:31 AM