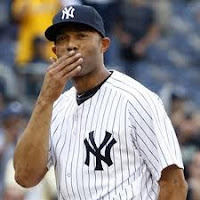 Mariano Rivera, the ageless, eighth Wonder of the World, may be headed for some offseason surgery, fanatics.

But don't panic. It's not at all what you may be thinking.

According to an article by George A. King III of The New York Post yesterday, Mo may need surgery on his... vocal cords??


"At a charity event in New Rochelle, the Yankees closer revealed he could be headed toward surgery to scrape his vocal cords. Rivera will meet with a doctor on Monday to find out if the ailment will require an operation."
And according to Mo, this has been going on for a while.
“It’s been a month," Mo said at the event. "Every time I talk it gets worse and worse."
Mo is probably one of the most soft-spoken "big" guys in any sport. For him to need surgery on his vocal cords is really ironic, considering he abuses his pitching arm far more, yet shows no signs of wear and tear. Well, as we get older, some part of our bodies will always need a tune-up. For Mo, I guess this is it, since the rest of him seems to be doing just fine.
But in all seriousness, I hope that if he does require surgery on those cords, that he has the speediest of recoveries and gets to painlessly enjoy the rest of his offseason.
Also...
Congratulations to Justin Verlander for not only winning the Cy Young Award, but for also netting the American League MVP Award. I personally don't agree with him getting the MVP as a pitcher since he  pitches, what, every 5 days? Unlike, oh I don't know, perhaps the other MVP candidates that play everyday, barring injuries or a day off? Just my opinion, folks.
Follow Rasheeda Cooper on twitter: @ra_cooper
Posted by Rasheeda Cooper at 11:43 AM

Email ThisBlogThis!Share to TwitterShare to FacebookShare to Pinterest
Labels: Mariano Rivera, Say It Ain't So Mo