It's not something that happens often on Brian Cashman's watch, fanatics, but the Yankees have been completely outbid for a big-time "prospect" to a smaller market team. 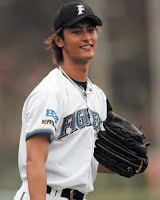 While there have still been no reports of the actual price the Yankees laid out to get rights to Yu Darvish, what has been reported is that it was "moderate." We know that the Yankees are proceeding with caution in regards to signing talent these days, otherwise, the Angels would have had no chance of signing CJ Wilson to their roster. But the word "moderate" for the Yankees pretty much implies that perhaps rumors of the team's decrease in payroll availability are actually true, even if we don't want to believe it, right? Maybe.

So now, as per The New York Post, the Yankees may be on the verge of losing out on the Yu Darvish Sweerstakes to the Toronto Blue Jays.

According to the report, Toronta laid out somewhere between $40 million to $50 million for the Hokkaido Nippon Ham Fighters superstar, and closer to $50 million. Keep in mind, this is just the posting fee. Darvish has been rumored to be seeking somewhere around $75 million on a 5-year deal in an actual contract; you do the math.

Are the Yankees really losing out here? Some scouts contend that Darvish's production on the mound has waned recently. Others just flat out argue that he doesn't quite have the "stuff" for the price tag he's seeking. My thought is that by posting money termed "moderate," the Yankees were probably never really that keen on signing Darvish in the first place. Perhaps it's true that the horrific memories of Kei Igawa, that we all still suffer, have left such a pain in the Yankees' craw, that they are just unwilling to lay out that kind of cash again for another foreign import. When you think that Igawa's total price tag was at $40 million compared to Darvish's possible $125 million, it's not that difficult to understand why the Yankees have essentially passed on this one. That kind of money for a guy that has never pitched in a major league game is too risky anyway.

But there is still hope. The Nippon team has until next Tuesday to reject or accept any deal made for Darvish. Perhaps the Yankees' offering is enough to send the hurler to the Bronx and grace us all with another bonafide superstar from Japan. Stay tuned...