Cervelli Made A Game of It, But... 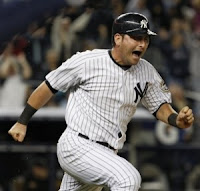 In the 9th inning of last night's game against the Diamondbacks, Francisco Cervelli gave the Yankees and the home crowd a reason to believe that, once again, a late-inning rally would precede another comeback win. But in extra innings, the Yankees would fall to Arizona and lose the game, 6-2.

Diamondbacks starter Patrick Corbin pitched a brilliant game, tagging the Yankees lineup with fast ball after fastball. He would pitch only one mistake--a 78 mph slider--to Robinson Cano who launched it into right center field on a line drive. he would keep the Yankees at bay from there until the 7th inning.

Then with JJ. Putz in for Arizona to close in the 9th, Cervelli launched a monster home run to left field, tying the game at 2-2. Brennan Boesch had already committed an out, so groundouts by Ichiro and Lyle Overbay sent the game into overtime.

And it would be all Arizona from there. David Robertson and David Phelps were able to keep the D-backs of the board through the 10th and 11th innings. But Phelps got touched up in the 12th. His first batter, Gerardo Parra, smacked a double to left. Two walks came from Paul Goldschmidt and Miguel Montero, on an interference call and hit by pitch, respectively. Then, Cody Ross singled to left scoring Parra. And finally, Eric Chavez, who I felt the whole series would get a big hit in somewhere, launched a double to center clearing the bases. Overbay, Brett Gardner and Vernon Wells would go down 1-2-3 in the bottom of the inning.

But one bright spot to last night's game was the pitching performance of Phil Hughes. Although he
gave up two home runs last in the 3rd and 6th innings, Hughes pitched a good game, getting his fastball up to 93 mph and having good location on both his fastball and changeup. His demeanor on the mound was also markedly different from his last start when he got hammered in Baltimore. Hughes pitched with an intensity suggesting that his first two starts were needed warm-ups following his injury, and that perhaps he's good to go now. He couldn't get the win, but he didn't lose either. And being able to stay in the game and pitch 7 innings was key in the Yankees having a chance to comeback and win the game.

Tonight, Andy Pettitte is back on the mound to open the series against Toronto. He faces RHP Brandon Morrow. I'll be paying close to attention to Andy's face looking for any signs of a grimace, possibly indicating tightness in his back. Game time is 7:07 pm.