The Texas Rangers advanced to the ALCS for the first time in their history last night by defeating the AL East champion Tampa Bay Rays, behind what could only be described as an all-out assault by pitcher Cliff Lee. 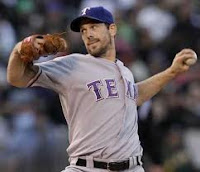 Too bad for Texas, he won't be their savior in game 1 against the Yankees and CC Sabathia.

The fact that Texas allowed the series against Tampa to get to game 5 was assurance that Cliff Lee would not be available for game 1 in the ALCS. A plus for the Yankees, who could be dealing with another not-so "CC-like" start from Sabathia--if history repeats itself--due to the extra days of rest. The Yankees will face CJ Wilson who in their last meeting, gave up 6 hits, allowed 4 runs and walked 3 batters in only 3 innings pitched. In his last 3 starts for the regular season, he posted a 1-1 record with a 7.20 ERA. And he's only pitched 1 postseason game in his career.

The odds are certainly in favor of the Yankees.

You have to believe that if the Rangers allow the Bombers to take one game of the first two in Texas, they're playoff run might well be over. Without throwing Lee into the mix for the first 2 games, the Yankees are certainly the better team, offensively and defensively. And as far as pitching goes, you'll have Wilson vs. Sabathia and either veteran Andy "Dandy" Pettitte or Phil Hughes facing Colby Lewis, another postseason rookie. AJ Burnett will pitch game 4.

And the Yankees win streak against the Rangers in the postseason is 10.

Sure, Texas goes into the series with more momentum with only two days between games, but the Yankees enter this series well rested both mentally and physically, and with a lineup that has played on the big stage before. The fact that this will be the first time the majority of the Rangers players have ever been in an ALCS could be a huge factor in who takes this series.

And the Yankees not having to face Lee in the first 2 games ain't too bad a deal, either.
Posted by Rasheeda Cooper at 2:19 PM