Talking to fans before the start of the game at the stadium last night, I got the sense that reports by some sports reporters suggesting that the Yankees could "crash and burn" in this ALDS series like they did in the 2004 ALCS to the Boston Red Sox, had really riled them up.

"Are they kidding me?," a young woman sitting three rows down from me asked. "This isn't the same team that played back then. And, uhh, this [opposing team] is Minnesota."

An older gentlemen sitting in my row, who jokingly claimed to have uttered the word "Yankees" at birth, shared the young woman's sentiment. "You can't compare the '04 team to this one. This is a better team and they play better together. We own Minnesota, but maybe these media hacks haven't noticed that. It's stupid."
Maybe we should all just take a moment and try to give the reporters the benefit of the doubt on this one.

What more do the Yankees have to do to convince the naysayers who still hold on to 2004, that this is a different team? How much more would they have to bear witness to in order to recognize that the caliber of this team, the cohesiveness of this team and the drive of this team are in stark contrast to the team in '04?
And the irony of it, is that the loss in '04 is why this team is a far better team. 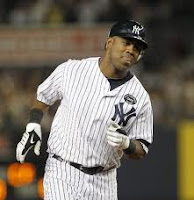 TheYankees slept on the Red Sox in that ALCS series. After pummeling Boston with a 19-8 win in game 3, the Yankees thought they had the series in the bag. They played with no sense of urgency, their hitting sputtered and they committed costly errors in 3 of those last 4 games.

What the Yankees did last year once they had the Minnesota Twins on the ropes, and what they've done again this year, is to play each deciding game knowing that being ahead in the series is no guarantee of taking it all. In yesterday's deciding game 3, the Yankees attacked early, getting things started with a triple off the bat of Sir Robinson Cano in the 2nd inning, who would eventually score on an RBI single from Jorge Posada. In the 3rd, Nick "Swishalicious" Swisher doubled to left and scored on a laser off the left field wall from Mark Teixera, putting the Yankees up 2-0. And then in the 4th, Marcus Thames sealed Minnesota's fate with a 2-run blast to right field, giving the Yankees a 4-0 edge. 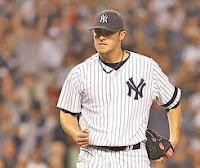 And Phil Hughes pitched like a madman on a mission. His "stuff" was as good or maybe even better than it was at the beginning of the regular season. He dominated Twins' batters for seven innings with a sharp cut fastball and nasty changeup, changing speeds on all his pitches. As Hall of Fame pitcher Dennis Eckersley joked on the TBS postgame show: "He had that wristy cheese!"