What Sabathia's Knee Surgery Could Mean 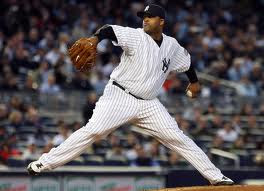 The Yankees announced today that lefty ace CC Sabathia will undergo arthroscopic surgery to repair a torn meniscus in his right knee.

The surgery, expected to be performed by team physician Dr. Chris Ahmad on Friday, October 29 at New York Presbyterian Hospital, will require a 3-6 week respite for the southpaw who seems unfazed by the impending procedure.

"Nothing major," CC said in a text as reported by the New York Post. "[I] should be ready to work out in three weeks."

Of course the report of this surgery has triggered many in the media and the fan base alike, to now pin Sabathia's knee to his "not-so-CC-like" performances this post season. Understandable, given that his pitching performance this year was nowhere near the realm of domination he pitched last year. But this concern is just a blip of what could be a bigger issue: Sabathia's weight.

The function of the meniscus is to diffuse the weight of one's body and reduce friction when they move. So it stands to reason that less weight applied to the meniscus during rehabilitation would only benefit in its healing. Sabathia is 6-foot-7 and listed as weighing 290 pounds. Since this will be the first time that he has this surgery, there's no model to refer to in determining how he may heal or how well he can perform afterward. Now this is probably not going to be a big issue, especially since the tear has been reported as "minor," but it very well could be; there may be some needed pressure on CC to come down on his weight a little.

And as we all know, Sabathia has been the anchor of which the Yankees have rested their "best chance of a new dynasty" hopes on. Baseball seasons are long and grueling, and no one on the Yankees' staff has recorded more innings in these past two seasons than their ace. They need him to be at his best. You can bet that the organization is not being as cavalier about the surgery as Sabathia is.

However, there is always a positive for every negative. In this case, you've got to believe that Brian Cashman will be pulling out all the stops in his pursuit of Cliff Lee when the chase for the free-agent begins. A "compromised" Sabathia certainly adds fuel to the fire; the Yankees will surely want to secure the best arm available in case Sabathia's knee becomes an issue in 2011.