My sincere apologies, fanatics, as I have failed to post on the last 3 Yankee games. Apparently my browser, Mozilla Firefox, became cranky for whatever reason and kept blocking me from opening up Bomber Boulevard. Don't really know what happened; I tried to clear cookies and the cache to no avail for 2 days, and now all of a sudden, I'm back in. So, I'm not gonna question it, I'll just be grateful that it's working and hope this never happens again. 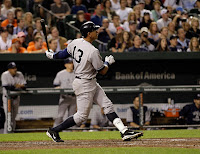 So where do I begin? Perhaps I'll start with a quick review of Saturday and Sunday's games. In a nutshell, the Yankees beat up on the Orioles. The birds had no answer for the Yankees brutal offense and dominating pitching of CC Sabathia on Saturday, as they were shelled, 15-3. Two homers by Russell Martin--3-run homer and solo shot--a 2-run homer by Jorge Posada and a grand slam by Alex Rodriguez put the game away. But the sweetest of them all was the 2-run homer by Brett Gardner in the 9th inning to answer an obvious shot to Martin's back by Orioles pitcher, Josh Rupe, who clearly didn't appreciate Martin embarrassing his team. Not only did Gardy back up his catcher, he also got the big hit he needed to hopefully get himself back on track.

Sunday's game was another stellar showing for Freddy Garcia who pitched 6 scoreless innings, showing the same "stuff" he displayed against Texas the week before. Unfortunately, his bullpen collapsed with Joba Chamberlain giving up a 2-run homer in the 7th to Mark Reynolds, and then the invincible Mariano Rivera showing his "human" side as he gave up a walk, single and double to allow one more run to score in the 9th. The game was tied; Garcia lost his chance for a 2nd straight win, but the Yankees scored 3 runs in the 11th and won the game, 6-3.

And now we get to last night's loss at the stadium to the Chicago White Sox. The lowly Chicago White Sox, who, going into last night's game, had lost 10 of their last 11. Why is it that the Yankees always seem to allow a lesser team to sneak one in? While I doubt the Sox will win this series, it just irritates me that they managed to best the Yankees last night. Typical of the Bombers to shut down to a pitcher they've never faced before, but this Phil Humber dude sported an 2-5 record with a 4.42 ERA coming into yesterday's game. With the way the Yankees' offense has been swinging the bats, I thought this game would go down as a win, but, that's baseball. On any given day the best team will fall to one of the worse. It happens. 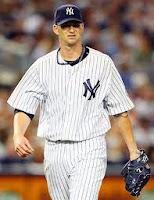 But the worse part of the loss was that AJ Burnett pitched another great game. He gave up only 1 run on 3 hits and he pitched 8 innings. Going into the game he hadn't pitched more than 6.1 innings in any of his starts. He gave the Yankees exactly what they needed, but got no help from his offense. That A-Rod broke up what was turning into a no-hitter by Humber in the 7th, was a relief, but very little consolation. The loss was the first April loss for AJ since becoming a Yankee. His record now stands at 8-1.

Tonight is game 2 of the 4-game series. It's a beautifully warm day in the Bronx and Ivan Nova is on the mound. He won his first career win in a solid performance last year against the White Sox. Let's hope history repeats itself.