Back to the Grind and Last Night's Debacle at Fenway

I would first like to apologize to my readers as I have slipped in my daily blogging duties. The truth is when this blog began back in October, I wasn't as busy as I am now. This semester of school and all that it entails, along with other writing projects that I'm working on and work itself, have made it a bit more difficult for me to get to my blog when I'd like to. But I promise all of you that, beginning with this post, Bomber Boulevard will be updated daily and I will get my posts out and available to you at a reasonable time. 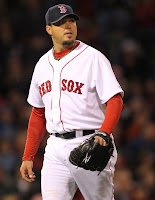 Okay, fanatics. Let's dissect what took place last night at Fenway. There's not much to it, really; the Yankees were completely shut down by Josh Beckett. Honestly, I can't ever remember him pitching so well. He had his fastball working and his changeup was killer. How many strikes did he get with that 12 to 6 changeup last night? I think I counted about five times that Yankee batters stood there watching it go down without a swing of the bat. Admitting like for anything that anyone wearing a Red Sox uniform does would be sacrilege. So I'll just say that I may have been somewhat impressed by Beckett's performance last night, hypothetically. 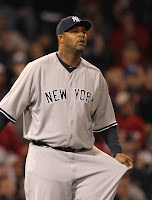 And although CC Sabathia was not at all ace-like, I have to applaud him for grinding out those innings and keeping Boston at one run. He did everything he could to give the Yankees a chance to get in the game, and that was no small feat as he had nothing working last night. He couldn't locate his fastball, his slider and breaking balls stayed low and in the dirt. I mean, CC really had nothing, but somehow managed to get the right pitch going when he needed it. And that's what makes a great ace, right? So, I take that back; CC was ace-like last night, he just wasn't CC-like.

And call me a fan in denial, but I'm not going to dog any of the Yankees batters. Seriously, when you're going up against an ace who's got all of his pitches working and is locating them beautifully, what can you do? The best hitters in baseball are no match for a performance like that, and Red Sox nation should be giving Beckett all the praise in the world because they probably would not have won without him, and they'd be looking at a 1-8 slide. And Jonathan Papelbon in the 9th was Jonathan Papelbon. The Yankees were hamstrung.

And make no mistake, fanatics, last night's win doesn't change the fact that the Red Sox are still a team in crisis. Their other pitching staff has yet to prove what Beckett did last night and without production from Youkilis and Ortiz, the losses will continue to pile up. There were pundits on SportsCenter today who said that Boston was "back on track." Really? They've only won 2 games! They sit at 2-7 and all of a sudden they're back? I think that the wins came against the Yankees, it's skewing the otherwise common sense of some of these sportscasters; the Red Sox can't truly be back until they've won some game in succession and get their win/loss totals back on the plus side.

And so, with no baseball tonight, I hope you all can fully recover from last night's loss, and gear up for a great series against Baltimore starting tomorrow. I'm seeing this series as a measuring stick to how seriously I'll take the birds this season. While they are on a great run and seem to be much improved under Buck Showalter, I am in no way willing to see them as a contender. It's not new for Baltimore to start great yet end at the bottom. Some teams just know how to be mediocre and the Orioles are one of them. 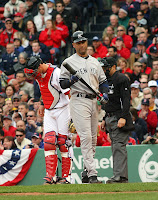 And one more thing, I hope that Alex Rodriguez will be well enough for tomorrow's game. With the way he's been hitting, the Yankees seemed "naked" without him last night. I also hope that Derek Jeter, Brett Gardner and Curtis Granderson will soon find a way to pull their heads out of the sand and get going already.