I can tell you, fanatics, that there was much buzz and excitement at last night's game. I was there, and even when the Yankees were down to the Orioles for eight innings, there was a sense that something magical was going to happen. My brother-in-law, who supplied the tix for last night's game, left after the eighth inning. I refused to go, as no die-hard fanatic of my caliber ever would, and I told him, "These are the Yankees. You never know what's going to happen." and I was right.

Ninth inning. Yankees down by one run. Jorge Posada steps to the plate and first pitch, BAM! Game tied at 5. Yankees would score no more runs that inning, and the game would go into overtime. In the 10th, Mark Teixeira would work a walk and Alex Rodriguez would follow with a single, moving Tex to 3rd. Nick Swisher would follow an out by Robinson Cano with a sac-fly to one of the best right-field arms in baseball in Nick Markakis. We've seen him gun men down at the plate before; Yankees batters especially. But not last night; Tex put it into 2nd gear running to home plate and the Yankees won, 6-5.

This game could have easily gone to the Orioles. Phil Hughes struggled again with his velocity and location and Orioles batters took complete advantage for 4.1 innings. They had tagged Hughes for 5 runs by then. The Yankee batters got hits here and there, but they were unable to capitalize for 4 innings. But in the 5th, A-Rod doubled. Robbie doubled. A-Rod scored. In the 6th Brett Gardner got on. Derek Jeter singled moving Gardy to 2nd. Tex doubled and Gardy scored. Then A-Rod hit a sac-fly and Jeter scored. The score was then 5-3 and you knew that the Yankees were going to do something special. 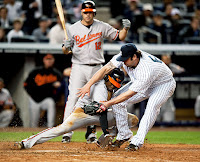 And so they did. They mounted an amazing comeback. Jorge's silent bat came to life and gave the team a chance. But even before that, Joba Chamberlain made one of the best plays at the plate that you could ever expect from a pitcher. He threw a wild pitch behind catcher Russell Martin, and Orioles leftfielder Felix Pie attempted to advance to home plate from third. Joba charged home plate, received the throw from Martin who retrieved the ball, and he tagged Pie out. The brilliance of the play was that Joba used his right leg to completely block the plate; Pie was tagged before he could even make contact. The out kept the score then at 5-3.

A-Rod had another great game, going 3 for 3. Robbie went 2 for 5. Curtis Granderson finally came out of his slump and went 2 for 4. Speaking of Grandy, he and Swish made two fantastic catches in the outfield yesterday, keeping the Orioles from extra base hits which would have surely allowed them to take the win. And, oh yeah, Bartolo Colon, the surprise of all surprises, came through again, pitching 3 innings in relief without giving up a run.

Yesterday's win was a great win and it marked the first "pie" game of the 2011 season. That honor went to Swish for the winning sac-fly. His excitement following the smash paralleled the excitement that was ever present in the stadium last night. The boys did their thing. It was a good night for pie.
Posted by Rasheeda Cooper at 5:27 PM