Last night's 5-4 loss to Minnesota never had to happen. Matter-of-fact, it never should have happened. The collapse in yesterday's game is a clear example of the how Joe Girardi over-manages his bullpen. I make no bones about touting Joe as one of the best managers in the game, who never gets any credit for managing a team of superstars which isn't as easy as most may think it is. But perhaps last night justifies the argument of many that Joe seems to have moved away from the brilliance of how he managed his bullpen in '08 and '09. 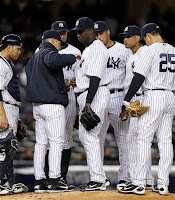 With the Yankees heading into the 8th inning leading the Twins 4-0, Girardi opted to bring in Rafael Soriano in relief of CC Sabathia. It was surprising on two fronts: 1) he had David Robertson warming up to come in and Robertson had only pitched one inning three days before against Detroit; 2) Soriano had pitched the day before. Now granted, before coming into last night's game, RaSo had only pitched twice, but looking ahead, you've got the Boston series coming up and, you've got Freddy Garcia facing Carl Pavano in tonight's game. As my blogging buddy J-Boogie pointed out, what if Garcia can only go 5-6 innings? You'll need Soriano to come in but now with 50+ pitches under his belt, he may not be available.

So Soriano comes in, walks Danny Valencia and Jim Thome, then gives up a single to Denard Span to load the bases. He strikes out Tsuyoshi Nishioka looking on a 92 mph fastball and it seems like he might be catching his stride, but he loses the zone again and gives up another walk to Joe Mauer which puts the Twins on the board for the first time at 4-1.

Girardi then decides to bring in Robertson, who gives up a double to Delmon Young thath cleared the bases and the game was tied at 4-4. You can say well, Robertson gave up the big hit that allowed the Twins to come back and win, but that double would have seemed a whole lot different had it been at the top of the 8th with no men on. Again, agreeing with J-Boogie, if Robertson could have gotten through at least 2/3 of the 8th but continued to struggle, that would have been the time to bring RaSo in for possible damage control. Hell, as good as Mo's been, and was, following Robertson in the 9th, I would have brought him in to finish out the 8th inning.

I can't really be mad at Girardi's next move, but it proved to support the classic phrase "hindsight is 20/20." With the game tied in extra innings, Boone Logan gets the call. He walks Span, then allows singles to Nishioka and Mauer and the Twins go up 5-4, which is all they would need. Had Girardi called in Luis Ayala instead, who pitched an excellent 10th inning relief of Boone, the game may have stayed tied and the Yankees would have had another chance in the 11th for a comeback.

What hurt most is that the win was blown for CC. He pitched an incredible game; throwing for strikes with his changeup, slider and fastball. This makes the second no-decision for the ace and you gotta believe that he must have felt really disappointed last night in the bullpen's performance, although you'll never hear him say that. After getting into trouble in the 2nd with singles to Jason Kubel and Valencia, CC was lights out, pitching 1-2-3 innings from the 3rd to the 7th. He gave up only the 2 singles, walked 1 and struck out 6.

And why couldn't CC pitch at least 2/3 into the 8th? If the argument is that you don't want to over-stretch him so early in the season, consider this: during CC's second start last year against the Rays, he pitched into the 8th in the now infamous "almost a no-hitter" game. In his second start. And last year, CC had more pitches going into the 8th of that game than he had last night, but Girardi had no problem stretching him. Hmmm.....

Fanatics, we know that Joe is a play-by-the-setup type of manager who obviously isn't comfortable with taking many chances. Last night was definitely an opportunity for him to take a chance on giving the 8th inning to Robertson, but, he made what he believed was the right call; the best we can hope for is that tonight's game is not more of the same.

The Yankees 4 runs came on a 3-run homer by Mark Teixeira and a solo shot from Andruw Jones. Alex Rodriguez continued his hit streak with a single in the 6th to right field.