Season of the Home Run Continues In Yanks Win

There's a reason why I chose to call this site Bomber Boulevard. The Yankees have always been a team to come up big when they need to via the home run. So far this season, homers have been what's propelled this team to lead the AL East in standings, not to mention break their own franchise record with 27 homers in their first 14 games. Last night, the "Season of the Home Run" continued as the Yankees took the series from the Texas Rangers with a 6-5 comeback win. 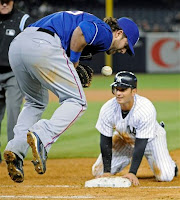 With all this talk of home runs, it was a single that actually won the game last night. Eric Chavez, who replaced Alex Rodriguez at 3rd while he continues to nurse his stiff back and oblique, broke a 5-5 tie in the 8th inning with a line-drive single to center that scored Mark Teixeira from second. I have to say that Chavez was a great pick up by the Yankees as he seems able to fill in for A-rod beautifully. Not just with his offense, but his defense is still solid. 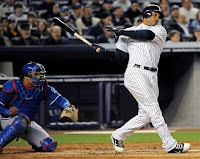 But back to the homers. In the 2nd inning, Robinson Cano hit a solo shot to the rightfield second deck, pulling the Yanks with one as Texas' Adrian Beltre had launched a 2-run homer in the first. With the Yanks down 3-1 in the 5th on an RBI single from Beltre in the 4th, Russell Martin slapped a run shot to left on a 1-2 count scoring Chavez, who singled to center. In the 6th with the Yanks down 4-3, Curtis Granderson hit another 2-run shot to right scoring Derek Jeter who singled to right. With the Yankees ahead 5-4, Texas' Michael Young doubled scoring Ian Kinsler, and the game was tied at 5-5 in the 7th. The previous play mentioned by Chavez and Teixeira in the 8th would win the game. 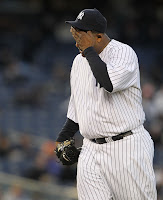 Even with the win though, I am a little thrown by CC Sabathia. He pitched another "shaky" game last night, giving up 8 hits and 4 earned runs in 6.1 innings on 117 pitches. He struggled to locate his fastball last night, and this has been his biggest issue in all of the games he's pitched so far. But, CC somehow still has great numbers. His ball-strike ratio last night was 39-73. His ERA is at 2.52, and he's only allowed 7 runs in his first 4 games. Not bad at all, but my concern is that he's laboring through his starts right now, and doesn't seem comfortable at all. I just hope that his performances and another win opportunity gone don't get into his head and take him out of his game. That missed opportunity came via Joba Chamberlain, who walked Kinsler in the 7th to set-up the RBI double by Young that tied the game.

Next game will be tomorrow in Toronto against the Blue Jays. With the off day today giving him 2 days to treat his back, A-Rod should be available.  AJ Burnett gets the start against Kyle Drabek, who's 1-0 with a 1.93 ERA in 3 games. Since coming to the Yankees, Burnett hasn't had much success against his former team. He has a 1-4 record combined for both the '09 and '10 seasons. Hopefully, he'll continue to pitch well tomorrow and improve to 2-4.