Freddy Garcia was the last Yankee starter to make his 2011 debut today; a cold, rainy and stark day at the stadium. Having only pitched one game in relief last week in Boston with a 79-pitch count, it would have been understandable if Garcia was "less than stellar" and a bit rusty in his debut. But what he did today, was the perfect example of how veteran pitchers can be successful by reinventing themselves when their best "stuff" no longer exists.

Garcia pitched 6 shutout innings today. He held off one of the best offensive lineups in the Texas Rangers by mixing not only his pitches, but his pitch speeds. Garcia worked his fastball, changeup, curveball and slider with varying speeds anywhere from 68 to 87 mph. And not just the variation of his pitches, his location was on point. In 6 solid innings, he allowed only two hits, 1 walk and surprisingly, had only 1 strikeout. He did all of this and only threw 84 pitches.

"I'm really happy...for starting," Garcia said. "I've been waiting a couple of weeks and it came out good." 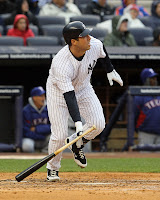 Garcia got early run support, beginning with a single to center by Nick Swisher, followed by a 2-run shot by Mark Teixeira in the first. In the 3rd, Derek Jeter worked a walk and was moved to 3rd base by a double from Swisher. Teixeira would hit a sac-fly and Jeter scored. Teixeira's sac-fly would provide the winning run, as the Rangers would only score 2 runs; both coming in the 8th inning as Rafael Soriano struggled, giving up a double, 2 singles and a walk. He managed to get out of the inning with the Yankees still ahead at 3-2, and then, Robinson Cano widened the gap with a 2-run shot that hit the flagpole in right. With the score at 5-2, Mariano Rivera pitched a scoreless 9th giving up only one hit, a double to catcher Yorvit Torrealba. 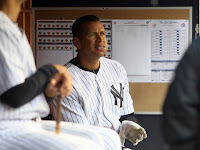 Today also marked the 2011 debut of Yankees back-up catcher, Gustavo Molina, who went 0 for 3 but called an excellent game behind the plate. Alex Rodriguez left the game after the 6th inning with stiff muscle soreness in his back and oblique. Joe Girardi said that Alex would require no testing and that he'll ask him tomorrow how he feels to determine if he'll play in the rubber game.