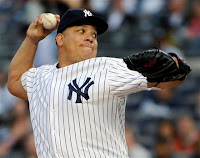 Before last night's 3-1 Yankee win over the White Sox, I tweeted to my fellow fanatics that we would see if Bartolo Colon was the real deal. I've given him much praise for what he's done so far, but there was still a part of me that was not ready to believe that he is as good as he looked in his start before last night. Bartolo proved me wrong, again.

His performance last night at the stadium was an even better showing than the start in Toronto. The biggest difference was that he pitched a brilliant 8 innings without any signs of fatigue or wear. He allowed only one run and struck out 6 batters. Again, he had all four of his pitches working last night--fastball, curveball, changeup and slider--and he dialed his fastball up to 96 mph. This is amazing when you consider that before this season, he hadn't pitched in the majors since '09.

But besides the performance, Colon is showing a cool confidence on the mound right now, that I believe is the reason why Joe Girardi opted to keep him in the game for 8 innings. We knew before the game that Rafael Soriano, who's clearly in a battle with himself right now, would probably not be available for the 8th inning, but I don't believe that to be the reason why Colon was stretched. David Robertson, Joba Chamberlain and Boone Logan were all available. I think Girardi saw what I did: a guy in a good pitch count that was in complete domination mode. Colon simply dominated the White Sox last night. He now sports an ERA of 2.77. Dare I say that Bartolo may be moving back to his 2005, Cy-Young form? It certainly looks that way right now.

And let's give it up for Robinson Cano, who is on his way to another standout season. With singles from Derek Jeter and Alex Rodriguez, Robbie clubbed a sharp line drive to the right field seats for a 3-run home run that would prove to be all the Yankees needed last night. He now has 4 homers and 10 RBIs on the season.

Overall, the Yankees offense didn't do much, but the home run was just enough for Bartolo to keep them in line for the win. Tonight, the ace, CC Sabathia, gets the start against Edwin Jackson. Could be another good night for Robbie, as lefties are hitting .329 against Jackson so far.