Cashman Not Expecting to Hear From Andy 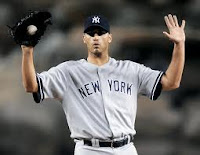 This according to an article from Brian Costello of the NY Post, although multiple reports yesterday said Andy Pettitte is expected to announce his decision this week, Brian Cashman says that he is not expecting to hear from Andy:


"We've been moving forward as if he's not playing," Cashman told the Post. "He may tell us otherwise at some point, but, no, this week we're not expecting to hear anything from Andy. He's already given us the courtesy on several occasions of telling us don't count on him and he's not expecting to play. It's not official, but he didn't want to hold us up."

The article further notes that Cashman only expects to her from Andy if he decides to play:


"He might call and say, 'Hey, I want to play,' but I don't expect a call with him telling us, 'Hey, I'm not playing,' because he's kind of already told us don't count on me playing,"


As the days go on, the optimism around Yankees universe of Andy's return grow increasingly slim. Never before has Andy been this vocal to the organization about his leaning toward retirement, and never have officials in the organization and teammates been this pessimistic about his return. The only thing in all this that is certain, is that Andy has the team and the Bomber fanatics sitting on the edge of their seats yet again this offseason. This may well turn out to be one of the most disappointing offseasons that the Yankees have had in a very long time.

Email ThisBlogThis!Share to TwitterShare to FacebookShare to Pinterest
Labels: Andy Pettitte, Brian Cashman, Cashman Not Expecting to Hear From Andy