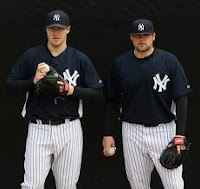 Via Jon Heyman, on twitter, the Yankees signed starter Phil Hughes and relievers Joba Chamberlain and Boone Logan to 1-year deals in the millions, thus avoiding arbitration. Hughes was signed for $2.7 million while Joba and Logan both received $1.4 and $1.2 million, respectively.

This was the first time in their careers that Joba and Hughes were arbitration eligible. Both made under $500,000 in 2010, so each deal was a considerable raise. No surprise that Hughes walked away with the most "greenbacks," as the recent 18-game winning, All-Star season proved his capability as a top-of-the-rotation starter. He was lights out for the majority of last season, his first full year in the rotation.

Joba's raise is likely to evoke many comments in the Yankees Universe. The Soriano signing has many people taking sides on what Joba's role should now be, as the Yankees insist on keeping him in the pen while many--myself included--think he should go back to the rotation. $1.4 million is a drop-in-the-bucket for the Yankees, but is significant a raise to at least assume that the Yankees still believe in his value. However, it's a typical amount for a bullpen reliever, so this could very well back up what the Yankees obviously think of Joba as a starter.