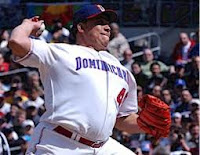 Oh boy. Is this really happening?

According to Jon Paul Morosi of Fox Sports, the Yankees have signed RHP Bartolo Colon to a minor league deal with an invitation to Spring Training. Joel Sherman of the Post tweets that if he makes the team, he'll earn $900,000.

Ok, I'll be the first to admit that when rumors of the Yankees interest in Colon came out in December, I completely dismissed them as nothing more than him trying to use the Yankees name as a means of building interest from other teams. I could not believe that the Yankees would have actual interest in Colon, who is but a mere fraction of the pitcher he used to be.

He hasn't pitched in the majors since 2009 of which he started in just 12 games and had a 3-6 record and 4.19 ERA with the White Sox. He won the CY Young in 2005, but completely imploded afterward, posting a winning record in just one of his next four seasons. Just recently in the Dominican Winter League, Colon failed miserably for team Leones del Escogido, having won none of his postseason starts. He posted an ERA close to 5.00 and had allowed 27 hits in 16 2/3 innings.

It's obvious that Andy Pettitte's "indecision" has left the Yankees completely vulnerable to themselves at this point. Colon? Has it really come to this? I was so looking forward to watching Spring Training. Now, I shutter at the image of Colon actually pitching in a Yankees uniform. It's just blasphemous.