Yanks Closing In On Jones; Damon Still An Option 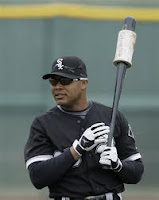 This came from a report this morning by Brian Costello of the NY Post:

"The Yankees and [Andruw] Jones continue to talk about the 33-year-old becoming the team's fourth outfielder. The sides remain apart on the contract terms right now, but a baseball source said the sides were moving closer."

The Yankees and Jones are reportedly stuck on the terms of an agreement as I'm sure Jones' agent, Scott Boras, wouldn't be doing his job if he weren't asking for more money than his client is actually worth. It's probable though that the Yankees will "step up" their talks with Jones, especially now that Marcus Thames has reached an agreement with the Dodgers, as per this article from the LA Times. With Thames definitely gone, the Yankees will need Jones to fill the 4th outfielder spot and back-up DH duties. If they can't get Jones, the Yankees are still said to be considering Johnny Damon for the position.

Damon is also being pursued by the Angels and Rays. The Angels are looking to fill the hole left by Hideki Matsui for DH/back-up left-fielder duties and the Rays are in need also of a DH and possible replacement for rookie left-fielder Desmond Jennings, in case he proves not ready for the big leagues. Both teams would offer Damon the regular playing time that he's looking for which would be a problem for the Yankees, as they can only use him part-time.

Posted by Rasheeda Cooper at 11:27 AM