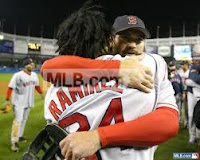 If this were, say, even 3 years ago, I might be a little intimidated and unnerved by this move.

According to this report from SI.com, the Rays have signed OFs Johnny Damon and Manny Ramirez to 1-year contracts for $5.25 million and $2 million, respectively.

Wow. What has the baseball world come to when Johnny Damon earns more money than Manny Ramirez?

Besides the subject of pay, I'm assuming that the Rays may be looking to make Damon their everyday left-fielder or platoon him with rookie Desmond Jennings, who now will probably have to show his moxie in Spring Training. Manny will probably assume the role of everyday DH.

I would say that it could be just like old times for both players when the Rays play the Yankees at the stadium, but I'm almost certain that Damon will receive a far warmer reception than Manny will.