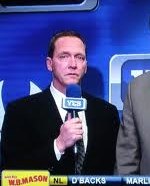 Via this tweet from Joel Sherman of the NY Post, David Cone is returning to the YES booth for 25 games during 2011.

I was just having a conversation with Jerome Preisler of the YES Network last week via twitter on this, and we both agreed that of all the YES announcers, Coney was our favorite. What makes him so good is that he has a very laid-back, "conversational" approach to the game. Some other announcers, whom I won't mention, tend to be too analytical in their approach to calling games which makes for boring commentary.

Coney also has a great sense of humor and doesn't mind taking jabs at himself or Michael Kay for that matter. I'm really looking forward to him coming back. For you fanatics who may not have known, apparently, the network and Coney could not agree on terms of a new contract when his expired in 2009, and he wanted to spend more time with his family. It was also rumored that the the Players' Association wanted to give him an executive position which obviously didn't happen. Their loss is our gain.

Email ThisBlogThis!Share to TwitterShare to FacebookShare to Pinterest
Labels: Coney Is Back, David Cone