Girardi: Andy Is Working Out To Be In Baseball Shape 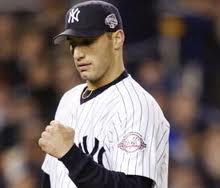 The old adage that "no news is good news" works in some cases, but it doesn't work here.

"Joe Girardi spoke to Andy Pettitte last week. No decision, but Girardi confirms Pettitte is at least working out to be in baseball shape."

I said a few days ago that I was not going to create anymore posts based on Pettitte's non-decision, as the endless reports and blogs repeating the same thing over and over again have made me dizzy. But to know that Andy is indeed working out, is well worth posting on. Matter-of-fact, this is probably the most optimistic I've felt this entire offseason.

Although Costello was clear to note that no decision has been made by Pettitte yet, the implication is worth getting excited about. The fact that Andy is working out to be in "baseball shape" means that the competitiveness that normally rises to the surface as Spring Training nears, has arisen once again. It's had its Hawaiian vacation, had its time to relax and "just chill" and is now ready to make its annual appearance.

Am I too excited? Probably. There is still a chance that he will walk away and ride off into the Texas sunset, but my gut tells me that he will muster up enough of the Old Andy for just one more fling. Roger Clemens be damned!

Email ThisBlogThis!Share to TwitterShare to FacebookShare to Pinterest
Labels: Andy Pettitte, Girardi: Andy Is Working Out To Be In Baseball Shape, Joe Girardi