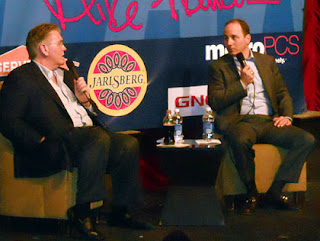 I'm a day behind on this one, but there was no way that I would let this story pass Bomber Boulevard without a retort.

Yesterday, Brian Cashman attended the WFAN Breakfast With a Champion annual sit-down with Mike Francesa, and shed some interesting light on his opinion of the future of Derek Jeter. There were also other comments that Cashman made, particularly that of Joba Chamberlain, which may end the endless debate over his future as a starter or reliever.

Mike Francesa has long been very open about his belief that Jeter will eventually be moved from SS to third, thereby moving Alex Rodriguez to DH. When he brought up Jeter possibly vacating SS to Cashman, the GM responded by saying that he would "be surprised" if Jeter remained at SS for the next four years; terming it a "Robert Yount situation," Cash sees Jeter moving to the outfield.

Okay, okay, okay. We fanatics and those around the blogosphere and some in the media, have speculated for a while now that Jeter will probably end his Yankee career at either third or the outfield because in either scenario, his failing range would be less exposed. So Cashman's opinion on this doesn't surprise me at all and I don't take offense to them. What bothers me, just a tad, is that the comment was made at all.

Did Cashman not learn anything from the Jeter negotiations about discretion? While I understand that he was posed a scenario by Francesa, did he really have to go into specifics about his opinion? Cashman did tell Francesa that "Jeter's our shortstop, period." Why couldn't that have been all he said? Even if he believed the opposite, why go there?

It was apparent at Jeter's press conference his disdain for the lack of discretion surrounding his negotiations with the Yankees on his new contract, do you think that Jeter is going to be OK with this latest "diarrhea-of-the-mouth" moment by his GM? I'd find it hard to believe that he would. A ballplayer of Jeter's caliber, whose held the same fielding position his entire career, can't be thrilled to hear his boss hypothesizing him being moved elsewhere. Cashman seems to be making it very obvious to everyone that he's "over" Jeter and what Jeter once was as an SS. Maybe I'm being a little too sensitive about this, but that's what it sounds like to me. And listen, if Cashman feels that way, so be it, but I find no necessity in having to voice it to a media and fan base that cling onto every word uttered in regards to the Yankees, particularly Jeter.

And, make no mistake, at Jeter's first meeting with the media in Spring Training camp, these comments will be brought up. Prepare yourselves for The Captain to lay down another "polite" zinger at his GM. As modest and humble as Jeter is, he's very sharp in his retorts to "negative" press.

And now, on to Joba Chamberlain. Cashman confirmed yesterday that Joba will remain in the bullpen because he has not been the same pitcher since he sustained a shoulder injury in Texas in 2008.

Wow. As I commented to my buddy Carlos in my Why Not Joba Chamberlain? post, an arm or mechanical problem that the team wasn't talking about, seemed the only logical explanation for why Joba wasn't being considered for a spot in the rotation. It was about time that someone actually came out and just said it, so that the speculation and debate over Joba since the signing of Rafael Soriano, could finally come to an end. You guys know which side I stood on on this issue, but I'm willing to concede my position, if for no other reason, what's best for Joba. I think he's been messed with enough already.