And the Award Goes To... 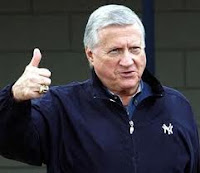 The late, great George M. Steinbrenner III headlines notable Yankees who will be awarded by the New York chapter of the Baseball Writers Association of America (BBWAA). Mr. Steinbrenner will posthumously receive the Joan Payson Award in honor of his community service.

Robinson Cano will receive the Joe DiMaggio "Toast of the Town" Award for becoming one of New York's favorite players. Phil Hughes will be awarded the Ben Epstein-Dan Castellano Award for his candor and accessibility to the media.

The awards will be presented on January 22 at the annual BBWAA dinner in New York.