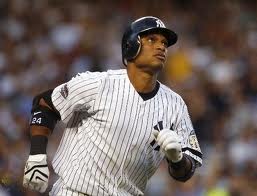 Robinson Cano was awarded his second Silver Slugger award yesterday, after a tremendous offensive season. He was by far the best offensive second baseman in the American League in 2010.

Cano is steadily establishing himself as one of the elite players in the major leagues. He won his first Gold Glove award this past Tuesday, and is still in the running to win his first AL MVP award in which the winner will be announced November 23rd. Cano's numbers for the year rank him as one of the top ten players in all the major categories. He batted .319 (5th) with 29 homers (t-9th) and 109 RBIs (7th). His slugging percentage was .534 (7th) and his OPS was .914 (6th).

Although the Yankees again dominated the AL standings for the majority of the regular season, many of the big names in their lineup (Jeter, Teixeira, Rodriguez) struggled offensively throughout, posting batting averages of .270 or lower. Cano remained consistent and carried the team on his shoulders. He fit perfectly in to the 5th slot of the lineup, proving that he could protect A-Rod in 4th.

"Everybody in the league would want to have a guy like that on their team," Curtis Granderson recently said of Cano. "He's got one of the most dangerous bats in the game."