The beauty of being a Yankees fan is that you get to enjoy watching the greatest team in the history of sports play. We fanatics are spoiled by great plays, big hits, comeback wins, and for us females, a roster of men that are very easy on the eye.

What many of us tend to take for granted are the voices that call the games; the broadcasters who we depend on for analysis, stats, interesting info, quips and rousing signature calls. They make the games worth watching or listening to. Don't believe it? Think of the odd feeling you may have while watching a Yankees playoff game. Even during a home game in the playoffs, the feel of it is not the same because the voices you're accustomed to listening to are different. You'd much rather hear Michael Kay and Ken Singleton call the game than Joe Buck and Tim McCarver, right? 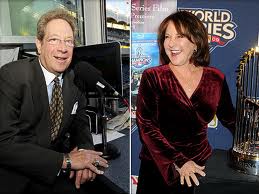 The Yankees contract with WCBS radio expires after the 2011 season. It is possible that the Yankees may look to move their radio broadcast of games to another station, which could also mean losing their on-air talent, i.e. John Sterling and Suzyn Waldman.

There have been no discussions on this from either side of the issue, but it is something to think about. Baseball is a business, and if Yankees brass believes that a move will be in their best interest, it will happen.

Imagine if you are a listener of Sterling and Waldman, not hearing their voices on the radio anymore. No more of Sterling's, "The Yankees Win. Theeeee Yankees Winnnnn!!" No more of Waldman's, "Oh my Goodness Gracious!" moments. While some fanatics might consider these obnoxious at times and a bit overkill, they'd also probably admit that the broadcasts would lose their luster and the familiarity of those voices that listeners are used to.

Sterling and Waldman are part of the Yankee family. Hopefully, they won't be going anywhere, anytime soon.

Email ThisBlogThis!Share to TwitterShare to FacebookShare to Pinterest
Labels: It Is High It Is Far It Is...Almost Over?, John Sterling, New York Yankees, Suzyn Waldman