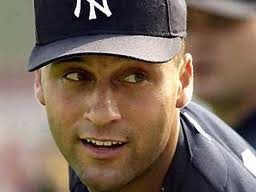 According to a report yesterday in The New York Times by Mike Schmidt, Derek Jeter is seeking a four to five-year deal at $23-$24 million per. This latest tidbit comes from a baseball insider who had been "briefed" on the matter. The source also claims that Jeter's agent, Casey Close, and the Yankees have done very little, if any, negotiating this past week.

While I feel somewhat giddy that an alleged asking price has been made public by Jeter's camp, finally, I'm going to hold off for at least another 48 hours before I allow myself to believe this story and wait out any reports dismissing it. Why? In the past week, their were two contract stories published on Jeter and Cliff Lee via "sources" that were untrue. My last post here at Bomber Boulevard was a correction to the claim that the Yankees sweetened their original offer of a 6-year, $120 million deal to Lee to $140 million. Turns out that the Yankee have yet to make any offer to "The Assassin." And in yesterday morning's Daily News, Bill Madden reported that a source claimed the Jeter camp's starting price was $150 million for six years, and they were unwilling to go below $25 million per. By 4pm yesterday afternoon, Tim Brown of Yahoo! Sports tweeted that Close said the report was "simply inaccurate."

There are two things we should take from all this, fanatics. First, we should all be wary of any stories based on account of "sources", particularly when the account pertains to an erroneous amount of money. Second, we might as well prepare ourselves for a long wait, because the Yankees have made no real ground on either the Jeter or Cliff Lee fronts. Until word comes directly from either players' agent, all reports are suspect and it appears that word ain't coming no time soon.

Email ThisBlogThis!Share to TwitterShare to FacebookShare to Pinterest
Labels: Casey Close, Derek Jeter, To Be Or Not To Be?