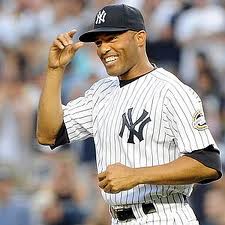 Mariano Rivera, who I would argue is the least expendable Yankee free-agent on the market right now and the true hero of every World Series win since 2008, turned 41 years old today.

Right now, Mo is in the midst of contract negotiations with the Yankees as he is seeking a 2-year, $18 million per deal for his services. Although the Yankees would like to give the greatest closer, ever, a 1-year deal, a report today by ESPNNewYork.com's Andrew Marchand says that Rivera's negotiations are moving along "smoothly", and that he will likely get around $16-$17 million, which is still an increase from $15 million in 2010.

Happy Birthday, Mo!! I wish you all the happiness and every dime that the Yankees can muster in the world.