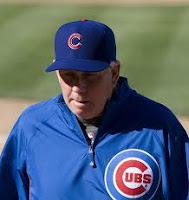 In an "off-the-radar" move today, the Yankees hired Larry Rothschild as their new pitch coach replacing Dave Eiland.
Before today, Rothschild was the pitch coach for the Chicago Cubs, a position he's held since 2002. His professional baseball career spans 36 years, and he's worked for notable managers including Lou Piniella and Jim Leyland. He was part of the coach staffs for both the 1990 Cincinnati Reds and the 1997 Florida Marlins championship teams, and was the first manager of the then Tampa Bay Devil Rays from 1998 to 2001. Ironically, Dave Eiland pitched for him during that time.
Apparently, one of the reasons Rothschild interviewed for the job--other than the opportunity to play for the greatest team in baseball--is that his home is in Tampa, FL and is just a few miles from Steinbrenner Field. Having more time to spend with his family was a huge factor in his decision to leave the Windy City.
“It’s got less to do with leaving the Cubs than it does more to do with the opportunity to be with the family and also with the Yankees,” Rothschild said, according to Brian Costello of the New York Post.

Joe Girardi, who caught for the Cubs on that 2002 team, said in a statement that Rothschild is “above all else an excellent teacher who brings a professional attitude and a keen sense of preparation to his craft.”
The new pitch coach's first order of business will be to make introductory phone calls to his new pitchers. He's already been privy to the work of some of his starters as he watched hours of videotape of CC Sabathia, Phil Hughes and AJ Burnett during his interview process.

This was a surprise move by the Yankees. In the past few weeks the notable list of interviewees for the position were bullpen coach Mike Harkey,Triple-A pitch coach Scott Aldred and Oakland A's minor-league pitch coordinator Gil Patterson. Rothschild had never even surfaced as a possible candidate.

Posted by Rasheeda Cooper at 11:52 PM