Yankees About To Make First Offer To Lee 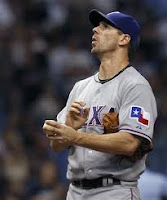 According to a report in the Boston Globe, the Yankees are preparing to offer "The Assassin" aka Cliff Lee, a 5-year deal worth between $115 and $120 million, which averages out to about $23-$24 million per.

The deal would not only place "The Assassin" within the hierarchy of highest paid players in the league, it would also match the per year earnings of CC Sabathia, whose contract pays him $23 million a season.

If Lee's salary were based solely on year-by-year performance during the regular season, I would say no way should he be paid the same as Sabathia. The following graphs make my case. Note that the blue line represents the league average in each category:

The graphs clearly show Sabathia's consistency throughout his career in the three major pitching categories. Lee has been up and down, but what is clear are the improvements in ERA and WHIP from '07 to '08, the year he won the AL Cy Young Award.

However, Lee's postseason stats make him worth every penny of this contract offering, and we fanatics know that on Bomber Boulevard, winning a championship is what matters. In his short postseason career of 10 games, Lee is 7-2 with a 2.13 ERA. In 35.2 innings this past postseason, Lee struck out 47 batters and walked only two. When given a chance for postseason play, he's proven that he's the most dominate pitcher out there, and arguably one of the best ever.

All graphs courtesy of fangraphs.com

Email ThisBlogThis!Share to TwitterShare to FacebookShare to Pinterest
Labels: "The Assassin" aka Cliff Lee, Yankees About To Make First Offer To Lee