Earlier in the week, Derek Jeter's agent Casey Close accused the Yankees organization of dealing with his client's negotiations through the media and not taking into consideration Jeter's overall contributions to the club. As reported by Mike Lupica of the New York Daily News, Close referred to the Yankees  negotiation tactics as "baffling:"

"There's a reason the Yankees themselves have stated Derek Jeter is their modern-day Babe Ruth. Derek's significance to the team is much more than just stats. And yet, the Yankees' negotiating strategy remains baffling." He added:

"They continue to argue their points in the press and refuse to acknowledge Derek's total contribution to their franchise." 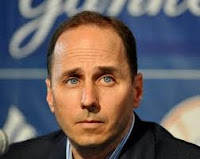 In this morning's New York Post article by George A. King III, Yankees GM Brian Cashman retorted with this:

“There is nothing baffling about our position. We have been very honest and direct with them, not through the press. We feel our offer is appropriate and fair. We appreciate the contributions Derek has made to our organization and we have made it clear to them. Our primary focus is his on-the-field performance the last couple of years in conjunction with his age, and we have some concerns in that area that need to be addressed in a multi-year deal going forward.

“I re-state Derek Jeter is the best shortstop for this franchise as we move forward. The difficulty is finding out what is fair between both sides.”

What I found most refreshing about Cashman's response, is that he noted outright that Jeter's fielding and age are an issue. Yeah, we all know that these were the crux of the Yankees position, but I give credit to Cashman for coming out and saying it. Up until now, it's just been a lot of slick rhetoric and use of the words "value" and "fair". Cashman is now holding a mirror up to Jeter's face and I think the Captain needs to take a long, hard look.

At the risk of exhausting myself with my own opinions on the Jeter front, I will wholeheartedly say, again, that Jeter and his agent need to understand that these negotiations are not about his legacy or about the amount of money he's generated for the organization; they are about giving him a contract that is fair in terms of his worth right now as a shortstop. If the Yankees were truly in the business of doling out money based on legacy and past financial contributions to the club, then Mariano Rivera would be and should be the highest paid player in baseball. Period.

Enough of the back-and-forth, Jeter. Please, be my Captain and do the right thing--be honest with yourself, and take what you're worth; you can work out options for a 4th and 5th year. It's really time to end this.