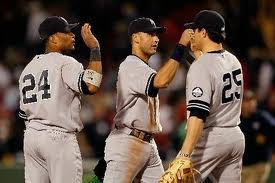 Robinson Cano was honored today with his first American League Gold Glove Award. The award comes after a stellar season by Cano, who once again proved that he is arguably one of the best defensive second basemen to ever play the game.

"Winning the Gold Glove Award along with my teammates Mark Teixeira and Derek Jeter is an honor," Cano told the media. "This is an award I've worked for since becoming a Major Leaguer and will continue to do so each season."

How good was Cano's defense in 2010? He finished the season with a .996 fielding percentage, leading the AL, for committing only 3 errors in 776 chances, which were the most chances by any second baseman in the majors. He set a Yankees franchise record for the most consecutive error-less games with 81 from April 23 - July 26. But numbers aside, Cano shined again at second this season by showcasing an amazing arm and finesse with each play.

Teixeira was awarded yet another Gold Glove for his consistent, gritty defense at first base. Not surprising to anyone, as Teixeira continues to cement himself as an elite defensive player.

"As a player who works very hard on defense, it is an honor to win my fourth Gold Glove," Teixeira said.

The four-time Gold Glove recipient posted a .998 fielding percentage via 3 errors in 1,310 chances in 2010. Again, the numbers are nice to reference, but Teixeira's ability to get to balls that are coming lightning fast toward him and the hole between first and second, can not be overstated.

Jeter rounds out the trio winning his fifth Gold Glove for his defense at shortstop. You can bet that many eyebrows will be raised, as it was obvious this year that Jeter's range is very much in decline. But, Jeter managed a .989 fielding percentage--the best of his career--committing six errors in 553 chances. However, the six errors, although great in the big picture, could only be a product of Jeter's diminished range, as he reached fewer balls. Less balls you field, the less errors to be made.

As competitive and proud as Jeter has always been, I'm sure he hears the "whispers" and will work even harder this offseason to improve his defense and show his true mettle.