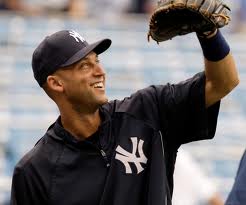 In the latest round of the Jeter negotiations, GM Brian Cashman is again putting the Captain and his agent on notice that the Yankees will not be bullied by Jeter's iconic status into an erroneous deal. In another statement yesterday to Wallace Matthews of ESPNNewYork.com, Cashman had this to say:

"We understand his contributions to the franchise and our offer has taken them into account. We've encouraged him to test the market and see if there's something he would prefer other than this. If he can, fine. That's the way it works."

The Yankees are pretty much daring Jeter at this point obviously, because they know that no other team is likely to pay him $45 million which is generous considering his decline. If he's not careful, he's going to find himself in the same position as Alex Rodriguez in 2007--crawling back to the Yankees with his head between his legs begging for a job. Even worse for Jeter, he's allowing what should have been a modest, conjoint meeting-of-the-minds, to turn into melodramatic fodder; something that his humble persona has never allowed.
Posted by Rasheeda Cooper at 12:43 AM