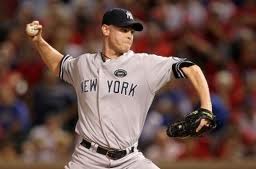 Wallace Mathews of ESPNNewYork.com reports that the Yankees are likely to offer arbitration to right-handed reliever Kerry Wood.

Offering Wood arbitration signals the Yankees' willingness for possible negotiations that would bring Wood back, most likely to be the 8th inning set-up man for Rivera. He pitched well while in New York in 2010 and is seen as a viable option for the set-up role other than Joba Chamberlain. As per GM Brian Cashman:

"I'm thinking yes on Wood. We'll do them a favor. If we put them into an arbitration setting, then we can take them out and make a fair market value offer to them."

The "them" Cashman refers to are Wood, Derek Jeter, Andy Pettitte, Mariano Rivera and Austin Kearns. Of the five, Cashman says he's only looking to make an offer to Wood. The arbitration deadline is midnight tonight.

Sources also tell Jayson Stark of espn.com that the Yankees will offer arbitration to Javier Vasquez also, although he is expected to decline. If he does, the Yankees will receive draft picks as compenstion for him.
Posted by Rasheeda Cooper at 3:16 PM