Hey fanatics, I'm back from my much needed, restful Thanksgiving weekend, and ready to give you all the lowdown on the "goings-ons" from the past 48 hours. The Yankees made some additional player moves, the Jeter negotiations appear to be moving into its next phase, and a superstar on-the-horizon celebrated a milestone birthday yesterday. 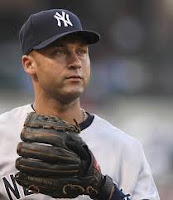 In the latest round of the now infamous Jeter negotiations, the Yankees appear ready to up their original offer to the Captain. Jon Heyman of Sports Illustrated reported yesterday that the new offer would be for a 3-year, $50 million deal, a $5 million raise from the initial $45 million offering. Jeter is said to be seeking a deal of $23-$24 million for 4-5 years, but the Yankees are unwilling to 1) go beyond a 3-year contract and 2) match Jeter's last contract which paid him $18.9 million per for 10 years of which he received $21 million last year. This latest offer by the Yankees would pay him roughly $18.3 million for the next three.

According to a tweet by Ken Rosenthal of Fox Sports on Saturday, the Yankees signed LHP Andy Sisco and RHP Brian Anderson to minor-league deals. Via the MLB Network ticker, both relievers were invited to Spring Training and so, will vie for a spot on the 25-man roster.

Sisco began his playing career as a starter in the minors after being drafted by the Chicago Cubs in 2001. He was taken by the Kansas City Royals in the 2004 Rule 5 draft and was converted into a reliever. He didn't do much in his time with the Royals and was traded to the Chicago White Sox during the winter of 2006. He missed the '08 and '09 seasons recovering from successful Tommy John surgery, but had a poor showing in 2010 going 4-4 with a 4.32 ERA with the San Francisco Giants Double-A team.

Anderson, a former outfielder with the White Sox was converted to a reliever while playing for the Royals minor-league system last year. In 17.2 innings, he posted a 2.08 ERA with a whip of 0.87 and struck out 17.

And a very Happy Belated Birthday to rising star Jesus Montero, who became legal yesterday as he turned 21 years old. The Yankees top minor league prospect is slated to become their everyday catcher next season and I'd like to wish him the best of luck as he has enormous shoes to fill.