Former Red Sox utility man Bill Hall signed a 1-year, $3 million deal with the Astros today according to this tweet from Ken Rosenthal of Fox Sports. He will be their everyday second baseman.

The Yankees were reportedly "aggressively" pursuing Hall, who would probably have been a back-up outfielder. He's not a star-type player, but he can hit, and he hit well against the Bombers last season. With the Red Sox, Hall posted a .247 AVG in 119 games with 18 homers and 46 RBIs. Not bad numbers for a utility guy who also possesses speed and solid defense. 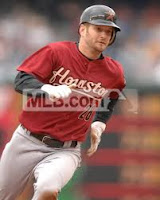 This signing by Hall will probably push the Yankees into an aggressive pursuit of Jeff Keppinger, the Astros utility guy that the Yankees have shown interest in.

Earlier this month, the team made Keppinger available for trade as they try to cut their payroll. He hit for .288 in 2010 with 59 RBIs and only 6 homers; solid numbers for a bench player. He's been primarily used as an infielder  for most of his career so he could be used whenever A-Rod or Jeter need days off or, the Yankees may look to utilize him in the outfield as a back-up to Gardner, Granderson or Swisher. Hopefully, the Yankees won't have to give up too much in a trade for him.