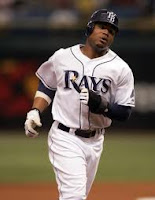 According to this report from ESPN Boston, the Yankees met extensively Carl Crawford's camp yesterday. Now that the Yankees have finalized contracts with Derek Jeter and Mariano Rivera, they can move forward with plans A and B being Cliff Lee and Carl Crawford, respectively.

Its been assumed by many reporters who are attending the Winter Meetings, that the favorite to possibly land Crawford is the LA Angels because they have the greatest need and would probably go all out to make him a lucrative offer. The Red Sox are also said to be in serious talks with Crawford.