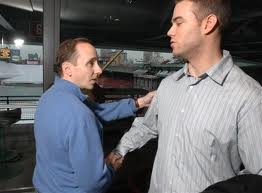 Check out this tidbit from Jack Curry of the YES Network and pay close attention:

"[Brian] Cashman had dinner with [Carl] Crawford’s agents on Tuesday, which was a bluff and was probably designed to get the Red Sox to inflate their offer to the leftfielder. The Yankees never made an offer to Crawford, and Cashman conceded that the Yankees weren’t interested in signing him. The Red Sox made an offer to Mariano Rivera, who the Yankees then signed quickly, and they also made a seven-year offer to [Cliff] Lee. Cashman might have been returning the favor by feigning interest in Crawford."

So the Yankees were never interested in Crawford. I've been saying all along that they didn't need him as in my opinion, Brett Gardner is the second coming of Crawford; all he needs is another full season in the lineup to improve his swing and timing. Curtis Granderson has his "first year in NY jitters" behind him and Nick Swisher just came off one of the best seasons of his career, and breeds an air of enthusiasm and positive energy. It also makes sense now why Crawford jumped on this deal from Boston. It was believed that he would wait out a deal for Lee so that if the Yankees didn't sign "The Assassin", he'd benefit from a huge offer that they were sure to make to him. With the Yankees making no offers, he made his move to the only other AL East team that could pay him big money.

But the more surprising revelation is that it was Boston that made the 7-year offer to Cliff Lee. I kinda, sorta suspected as much, but couldn't be sure as none of the sportswriters at the meetings seemed to know that it was Boston and there was never any mention of them as a team who'd even make that offer. Seems like Boston has re-upped on the bravado that was snatched from them when the Yankees stole Mark Teixeira two free-agent seasons ago. They've been relatively quiet until now and are probably looking for some retribution against their old nemesis.

But Cashman always seems to be two steps and a drink ahead of his competition. As I posted here, I suspected that Cashman's pursuit of Crawford was somehow in retaliation for Boston offering a deal to Mariano Rivera. Having them also pursue Lee was I guess, the ultimate no-no for the Yanks. While it had been assumed that Crawford would get a huge deal all along, Boston may not have made it as lucrative as it was if the Yankees didn't fake getting in on the action.

So kudos to you, Cashman. Not only did you expose the Red Sox fears, you also proved to the fans of Red Sox Nation that their team too, will spend big money to "buy" a championship.