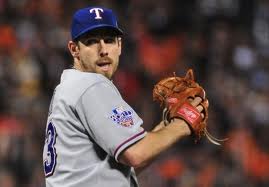 The Winter Meetings have come and gone.The hope of the Yankees and their fanatics was that they would come away with at least an agreement from the biggest prized free-agent this offseason, Cliff Lee. While the Yankees have done everything possible to convince "The Assassin" to join the ranks of a now questionable rotation in the Bronx, the southpaw remains undecided. Will he come to New York, lured by the biggest contract for any pitcher in history? Will he stay in Texas, secure in the camaraderie of his former teammates and closeness to his home in Arkansas? Or will he go to the "other" team, whichever team that is, attracted by an offer that best suits his needs? These are the questions that many wish they knew the answers to, but will have to wait to find out.

Word is that Lee will make his decision sometime this weekend, probably today. Whatever he decides, it will change the dynamic of the Yankees status in the AL East, tremendously. If Lee accepts the Yankees' offer, they will remain the favorite to win the AL east, no question. A rotation with "The Assassin" in the 2-spot behind CC Sabathia, followed by Phil Hughes and hopefully, Andy Pettitte equals a level of domination that has been absent from the team since the late 90's when Pettitte, El Duque and David Cone terrorized everyone. But, if this deal falls through, the Yankees will be without an ace lefty who can neutralize the better lineups with good left-handed hitters like the Boston Red Sox. It will also force the Yankees to go with a novice in Ivan Nova--yes, although he has pitched as a starter, he has yet to do it for a full season and he has yet to pitch a quality start of 6+ innings, so he's still a novice--and even worse, if Andy Pettitte does not come back, the Yankees will have try and find a decent lefty to make a trade for, as there aren't any viable lefties left on the free-agent market. Otherwise, expect to see either Sergio Mitre or perhaps Andrew Brackman in the 5th spot.

And so, fanatics, we wait. We wait to see whether or not Lee is of a higher moral standard than other athlete I've ever known, by choosing camaraderie over money. If he proves to be the archetypal "show me the money" man, we should all be celebrating very soon.

Email ThisBlogThis!Share to TwitterShare to FacebookShare to Pinterest
Labels: "The Assassin" aka Cliff Lee, The Waiting Game